Penrite Oil Honda Racing’s Cody Cooper has suffered a fractured eye socket and cheekbone after crashing during practice at the opening round of the MX Nationals at Broadford Motorcycle Complex today. 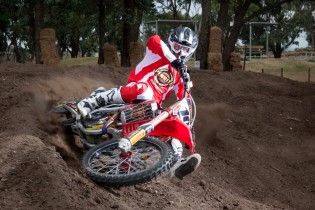 Cooper crashed on a section of the track that didn’t have a first or second line of protection. After being tended to at the scene by Racesafe, Cooper was taken to hospital for x-rays and further treatment.

Penrite Oil Honda Racing Team Manager Mike Landman said it was a bitter blow for the team especially as the injury could have been avoided.

“This is absolutely devastating,” Landman said. “Every box had been ticked in preparation for this event.

“It is particularly hard to take knowing this could have been avoided if there had been haybales or some other first line of protection in place.

“At this stage we know he will definitely miss Appin as he will require further surgery to his eye socket and cheekbone once he gets back to New Zealand,” he added.

The Penrite Oil Honda Racing Team will provide another update once Cooper has undergone surgery next week.

Have you Ridden A BMW GS? Here’s Your Chance With the BMW GS Experience

05/08/2013 Shane Booth NEWS Comments Off on Have you Ridden A BMW GS? Here’s Your Chance With the BMW GS Experience