Local GYTR Yamaha rider Jed Beaton has overcome a shaky start to come home strongly and take overall honours in the MXD class at the opening round of the 2014 Monster Energy MX Nationals. 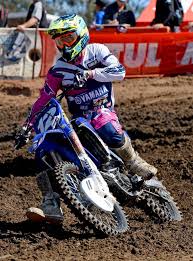 The standard of racing in the under-19 class was extremely high at the picturesque Broadford track, as Beaton battled hard all day with Craig Anderson Husqvarna Racing Team’s Egan Mastin and Husqvarna’s Nathan Crawford for round honours.

Beaton could only manage fifth place in the opening moto of the day, before recording back-to-back race wins in the second and third motos to finish two points clear of Mastin.

Mastin was super consistent all day posting a second, second and third from his three races to finish ahead of Crawford (first, seventh and second) in third place overall.

Bolton Motorcycles KTM rider Jack Simpson looked likely to snare an outright podium placing following two third-placed finishes in the opening two races, but could only manage sixth in the final moto to end the day in fourth place overall.

The pair will compete for a new look KTM development program after joining forces with Raceline. […]

Kylie Fasnacht swept both motos for round four of the AMA Women’s Motocross Championship. […]