Daniel Milner will stay on with the N-Fab/AmPro/Yamaha bLU cRU Off-Road team for 2016. 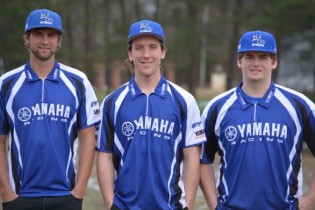 Milner will commence his 2016 season for the team this weekend as the Kenda AMA National Enduro Championship kicks off in Manchester. The four time Australian four-day enduro champion will lineup once more alongside last year’s GNCC XC1 runner up Grant Baylor.

The pair will be joined by Nick Davis for the new season who was a GNCC XC2 podium regular in 2015. He will hope to bolster the ranks led by team owner Randy Hawkins, a 7-time AMA Pro Enduro Champion and 13 times ISDE Gold Medallist.

Yamaha spokesperson Luce is confident in the off-road rider line-up for 2016 which boats a very capable group of riders.

“The 2016 season marks a truly exciting milestone in our partnership with the N-Fab/AmPro/Yamaha team. It’s the first time that the entire team will be mounted on off-road-specific models. The new YZ250FX and YZ450FX models were designed specifically for off-road racing, and we’ve assembled a talented group of young riders to showcase these new models in the most prestigious and challenging off-road racing series in the U.S.”

The familiar number 22 Yamaha stormed to victory at the inaugural AUS-X Open Supercross on Saturday night. […]

Dutchman Jeffrey Herlings has won the world’s toughest motorbike beach race in the Dunes of The Hague. […]

The Nitro circus co-founder made the announcement prior to the opening show of the 2016 world tour in Stockholm. […]