The first lot of finals action kicked off at the Riverland Junior Motorcycle Club for the 2016 KTM Australian Junior Motocross Championships. 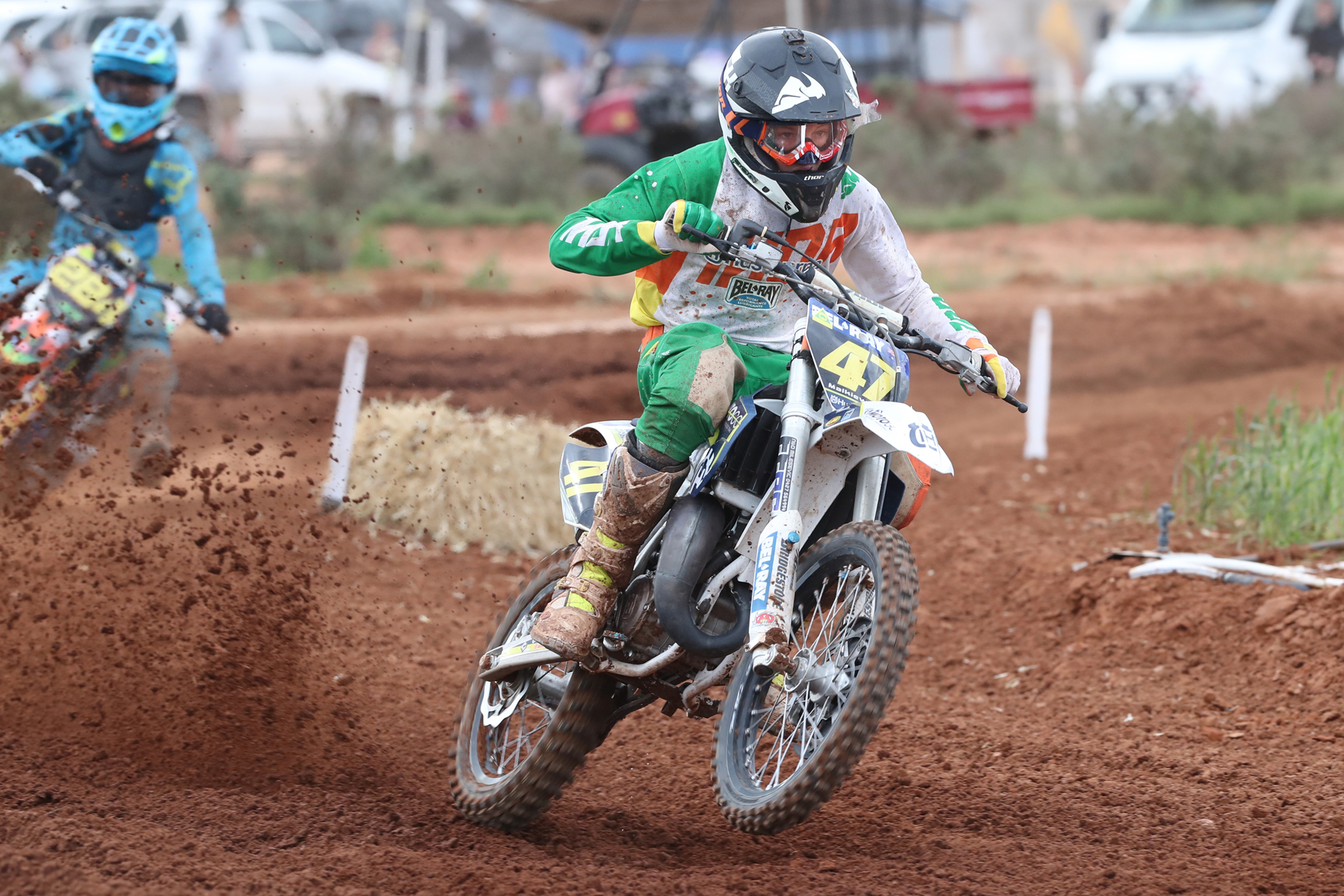 Press Release
With qualifying wrapped up by lunch time today, riders headed into this afternoon’s program with the opportunity to pick their gates, and collect the first spoils of the week-long event, and the competitors across all classes were impressive from the minute bikes hit the red South Australian surface.

With multiple Australian Titles on the line, the battles were thick and fierce throughout the first motos today, giving parents, teams, and spectators a taste of what is set to play out for the remainder of the week.

The 128-150cc/200-250cc 13-U15 Years category were the first finals race on the line at the KTM AJMX today, and with so much talent crammed in to the class, when gates dropped it was a fight to the first turn.

But it was yesterday’s fastest qualifier Mason Semmens (KTM Racing Team) who launched in to the early race lead, followed by Rhys Budd and Korey McMahon.

From there, Semmens and Budd checked out on the field, putting a whopping 13 seconds between themselves and third placed McMahon.

As the first final reached it’s closing stages there had been little change to positions, Semmens stretching out his lead on Budd, followed by Regan Duffy and John Bova in third and fourth places respectively.

And when the chequered flag flew, it was Semmens who collected his first finals victory from Budd and Duffy in second and third, followed by Bova and McMahon in fourth and fifth places respectively.

With plenty of action on track this afternoon, when the ladies hit the Riverland circuit for their first final, their class was no exception. After a small pile up just after the first turn it was Husqvarna mounted Tanesha Harnett who took control of the race, however Madison Healey and Tahlia O’Hare were hot on her tail in second and third positions.

With ten minutes on the clock for the 85cc females, Healey wasted no time in making the pass on Harnett for the lead, but the battle for the top spot did not stop there – by lap three, O’Hare had made her way in to the lead position, while Harnett dropped back to fourth place.

And when the chequered flag flew, O’Hare had plenty of reason to celebrate, taking the first finals race victory from Healey in second, while Ebony Harris snatched up third. Despite leading for a period of time, Harnett crossed the line in fifth position behind Kara Cats.

This morning Husqvarna Australia’s Bailey Malkiewicz set the pace for the week with the fastest qualifying time, a 1:57.227 from Tyler Darby and John Bova, and when their first final kicked off this afternoon it was a familiar sight with Malkiewicz snatching up the early race lead straight after the gate dropped from Bova and Darby.

After only one lap, Malkiewicz began to separate himself from the talented field of riders, while behind him New South Welshman Bova continued to maintain second position ahead of KTM rider Michael Murphy.

As the first race for the 85cc/150cc 14-U16 Years class reached it’s closing stages no one was able to get close to Malkiewicz’s undeniable speed, and when the chequered flag flew, it was in the top position that the Husqvarna rider stayed. Second place was secured by Bova, while Darby wrapped up his first final for the event in third position. Murphy crossed the finish line in fourth followed by Ryan Morgan in fifth position.

The young Queenslander Zachary Watson was the fastest rider on track during qualifying for the 65cc 11 years’ class at Renmark this morning, setting a flying lap time of 2:11.322, from Liam Atkinson and Angus Riordan – the trio taking the top three gate picks for when racing kicked off this afternoon.

And when racing commenced it was number on qualifier Watson who after one lap had established himself as the race leader, while Jackson Camilleri and Ryan Alexanderson occupied second and third positions.

With an Australian title on their minds, the top four riders began to check out, Watson leading the way from Camilleri, Alexanderson and Deegan Mancinelli, who had joined the party in fourth.

But when the last lap board was shown and then the chequered flag was displayed it was Watson who crossed the line with the first 65cc 11 years’ finals victory. Second was snatched up by Camilleri, while Alexanderson held on to finish in third position. Myles Gilmore wrapped up his first finals race today in fourth, followed by Mancinelli who dropped back to fifth position by the conclusion of the moto.

Racing for the 2016 KTM Australian Junior Motocross competitors will continue tomorrow morning at the Riverland Junior Motorcycle Club at Renmark in South Australia.

Mitch Evans has swept round eight of the Motul MX Nationals moving into the championship lead. […]

VIDEO: Darryn Durham in the hills

19/06/2013 Damien Ashenhurst NEWS Comments Off on VIDEO: Darryn Durham in the hills

Watch Darryn Durham in the hills […]