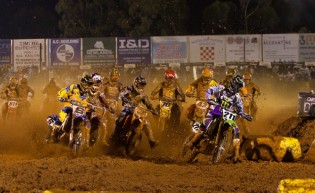 Saturday October 22, 2011; The first round of the Monster Energy Super X took place in Melbourne tonight in incredibly tough conditions with huge downpours throughout the day and night making the track extremely wet and slippery. JDR Motorex KTMs Tye Simmonds was the first victor in the Open class and his team mate Matt Moss took out the Lites in a night that produced plenty of thrills and spills for the animated crowd at the Melbourne Knights Stadium.

Due to treacherous track conditions organisers were forced to change the final format to one 12 lap race in the Opens. Monster Energy Kawasaki’s Billy Mackenzie took the holeshot with Simmonds second and Carlton Dry Thor Honda’s Cheyne Boyd third.

Mackenzie slid out on one of the corners half way through the race allowing Simmonds to pass and take the win. Mackenzie held on for second and JDR Motorex KTM’s Ryan Marmont came third after passing Boyd. CDR Rockstar Yamaha riders Jay Marmont and Jake Moss both struggled in the wet and slippery conditions finishing eighth and tenth respectively.

“I am stoked to win my first race back in Australia after racing in the USA all year. It was tough out there tonight, but I managed to have some fun and the team has had some great results tonight,” said Simmonds.

In the first of the Double Header finals in the Lites Monster Energy Kawasaki’s Dean Ferris took the holeshot and never looked back to claim the win. There were a few battles for second and third with Moss eventually claiming second after recovering from an earlier fall and JDR Motorex KTM’s Josh Cachia was third.

Ferris came out firing again in the second final taking the holeshot with Moss and Serco Yamaha’s Luke Styke close behind. Ferris lost control mid race allowing Moss to take the lead and the win. Styke took second and JDR Motorex KTM’s Brendan Harrison came third. Ferris climbed his way back to third, but crashed again just before the finish line and had troubles starting his bike before he finally got it working and rode over the finish line in tenth.

“I had to make my way through the pack in the first final, which was tough but the second final went much better and it’s great to get the win. The bike is running really good and I felt great out there. It was tough conditions tonight, but I am glad we could put a good show on for the crowd,” said Moss.

Round two of the Australasian Supercross Championship will take place at WIN Stadium in Wollongong next Saturday October 29.

The British circuit has been named as a replacement for Glen Helen. By Hayden Gregory Following news yesterday that Glen Helen track owners and organisers had decided to part way for next year’s event, a […]

The NPS Monster Energy Kawasaki Racing team have their sights set on a title at the upcoming 2015 Australian Supercross Championship. […]

With three major 2016 Australian Motocross Championships up for grabs at Coolum this weekend, two former World Champions who are no strangers to success, have weighed in on this year’s titles, and shared that they too will be making the trip to the Sunshine Coast for Round 10 of the Motul MX Nationals this Sunday. […]