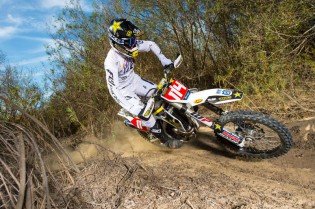 Strang will lead a five rider team for 2016 including Andrew Delong, Jacob Argubright, Mike Brown and new addition Colton Haaker. It will be Strang’s second season with the team following a successful 2015 run finishing third in the Grand National Cross Country Series.

The 2016 season will see the Aussie board the all new Husqvarna FC450 for the GNCC and AMA National Enduro Series.

“I am amped to race for Rockstar Energy Husqvarna again.” Strang enthused. “I feel like the new FC 450 is just what I need to get up on the top of the box!”

Strang will be out to impress early in 2016 as the opening round of the AMA National Enduro Series kicks off in the first week of February,

Decotis Strives for three in a row

[cmsmasters_row][cmsmasters_column data_width=”1/1″][cmsmasters_text] Trailriding is the lifeblood of the sport. It’s the entry point for most, an obsession for some and a career for those who take it to extremes. Below is a selection of off-road […]