The American rider is raring to go in the 2015 Australian Supercross Championship, competing in the SX2 class for team Penrite Honda. 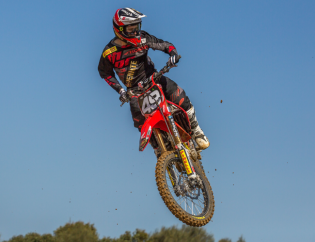 The event marks Decotis’ first ever trip to Australia as he is set to line-up against a host of international stars, starting with the opening round to be held in Bathurst this weekend.

Joining him in the Penrite Honda Racing team will be fellow American Gavin Faith and Venezuelan champ, Anthony Rodriguez. The two international riders will compete in the SX1 class, a step up for Faith who is the reigning Australian SX2 champion.

Decotis boats an impressive racing resume including top ten places in the 2014 and ‘15 250cc AMA Supercross Series. The 24 year old has also won a supercross championship in Europe and contested a full season of MXGP in 2013 with Kawasaki.

“This place (Australia) feels just like home,” says Decotis. “I feel comfortable on the bike already and am really happy with the package the Penrite Honda team have given me.

“They tell me the new Honda is an improvement on last year’s bike, and given the team won the SX2 championship last year with Gavin (Faith), I am pretty confident we are going to be competitive.

“I raced Honda this year in Supercross in America, so the bike feels familiar, while the whole Penrite Honda team has a pro set-up and everyone is making me feel right at home.”

“It’s hard to say how I am going to go, as I haven’t raced these guys before,” Decotis offers.

“Luke Clout has done well in some international races, and I have watched the other guys like Jay Wilson and Caleb Ward online, so I am expecting some great battles.”
The battles will come to life as the Australian Supercross Championship hits top gear in Bathurst this weekend. Tickets are still available and can be purchased at: www.ticketebo.com.au/supercrossbathurst

KTM’S GIBBS CRACKS A PODIUM WITH A CRACKED KNUCKLE

Mixing it on a motocross track against the best MX1 riders in Australia while carrying a broken hand may not be everybody’s idea of a perfect Sunday, but KTM Motocross Racing Team rider Kirk Gibbs certainly got his Monster Energy MX Nationals campaign off to a near-perfect start. […]

Herlings Hits Back at Take out Claims

Red Bull KTM rider Jeffrey Herlings has responded in the wake of claims he aggressively took out Suzuki’s Ben Townley. […]