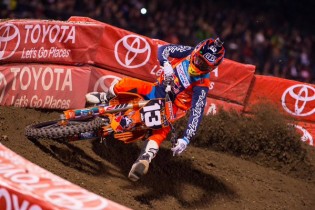 Nelson has been injured at a practice track in Southern California as he prepared for round two of the 2016 AMA Supercross Championship. The crash resulted in the rider being taken away in an ambulance with concussion and suspected shoulder injuries.

This is a huge blow for Nelson who impressed over the weekend in Anaheim recording a second place finish behind Copper Webb in the 250 class.

TLD’s @jessynelson13 had a high speed get off today while practicing for this weekends SX race in San Diego. Following the crash Jessy was immediately taken to the hospital for further evaluation. Thankfully at this point his MRI and CT scans show no serious injuries. Nelson will spend the night in the hospital to further monitor his condition. We wish Jessy a speedy recovery and hope to see him back in action soon.

The Dirt Action team wishes Nelson a speedy recovery and we will update you on his condition once more information comes through.

All the thrills and spills from round seven of the Monster Energy Supercross season. […]

Hear from the riders following the GP of Mantova.   Tim Gajser (1st MXGP): “It’s just been an amazing day today. In the first race I made life easy for myself with the holeshot and then […]

Phillips Relaxed Ahead of A4DE