The American rider has spoken following the nasty incident at Motocross of Nations. 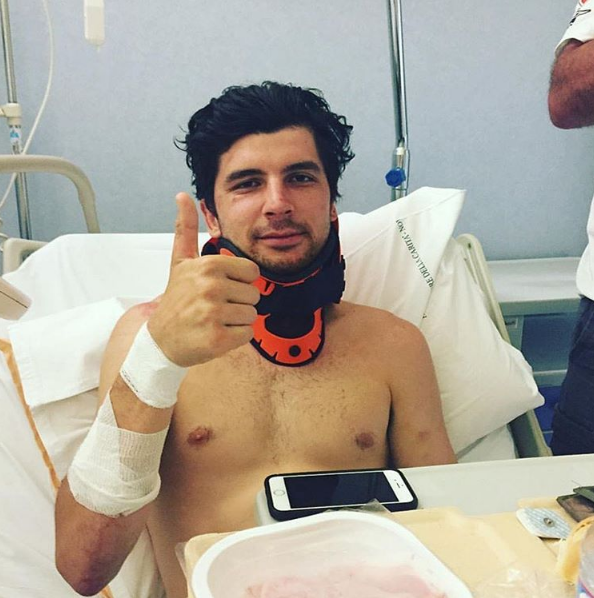 Jason Anderson blitzed the field to beat Jeffrey Herlings straight up and win the second moto at the Motocross of Nations in Italy over the weekend. In bizarre circumstances the Husqvarna rider decided to roll the finish line before raising his hands in triumph.

What followed was hard to watch as a lapped rider jumped the finish line, landing straight on Anderson mid celebration. The race winner was immediately knocked to the ground unconscious as the medical crew came to his aid. Anderson was taken straight to a local Italian hospital before updating fans hours later on his surprisingly stable condition.

“My first race went pretty well from the get go,” Anderson said. “I got the holeshot and started pulling away from the field. Midway through the race Herlings caught up and we had a pretty good battle for a couple of laps before he went down. After that I was just coasting to the finish to get the win. I was really excited to cross the line first but right after that I felt another bike landing on me. We’ve got everything checked out and I’m going to be OK. It’s just a bit of a bummer I couldn’t get out there in the last moto to help Team USA battle for the win.”

Anderson can consider himself a very lucky man given the circumstances. Team USA were consequently left with just one rider for the final race, Cooper Webb who was in pole position to secure the title for his team before a disastrous crash in the closing stages. America would drop to third place behind Team France and Team Netherlands.

If you have ever wanted to do this ride, here’s a great reason to pull the trigger on it now! […]