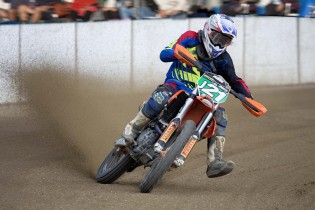 The 17 year old hit the ground running earlier this year winning an amazing 10 state titles across New South Wales and Queensland in a one month period. Form has undeniably continued to run for Brook who cleaned up on the weekend at the Australian Long Track Masters.

Jumping on his 2016 KTM 250 SX-F, Brook powered to a narrow victory in the Pro 250 class ahead of Ben Cook and Zach Cook. With one victory to his name the youngster then boarded the KTM 450 SX-F taking out his second win in the Pro 450 class.

The final race of the day the Pro-Open proved the most exciting as Brook overtook leader Michael Kirkness on the very last corner of the race to take a stunning victory by just .013 of a second. The win marked Brook’s third for the day in an Australian Long Master’s clean sweep.

“The 450 was pretty plain sailing after I got the holeshot and lead from there, and in the Pro 250, Ben Cook was right behind me the whole time and nearly passed me up the inside on one lap, but I held him off.

“The Pro-open was pretty exciting; it was a real close race. Mick was racing on a 500 two-stroke on methanol, and I was on the 2016 450, so it was pretty awesome to beat something like that. I was in second for the whole race until the last lap, but I was just making up a little bit of ground every lap. In the last corner I passed Mick up the inside, and the crowd was going off. I was stoked to get the win.

“My 2016 KTM is completely different to my last year’s models. Different handling, and the power delivery is a lot smoother, which makes it easier to accelerate when the track gets slick by just not creating as much wheelspin.””

Finishing third in the open class was Team manger of the KTM Off-Road Racing Team, Ben Grabham. Showing he still has what it takes, Grabbo borrowed a KTM Desert Racing Team 500 EXC, qualified for the 12 rider final from 52 competitors and then landed on the last step of the podium.

“I scraped in with a third so it was a good night. I haven’t done a flat track since this time last year, but obviously since it’s nice and close to home, I thought I might as well grab one of the old Finke bikes that we had sitting there. Apro gave us a bit of a hand setting it up – we didn’t really go into too much detail – but it was awesome.

“I don’t think I was ever really out of the top three all night. It was pretty fierce racing too, because we had I think 52 of us trying to qualify into 12 by the end of the night so it was pretty cutthroat racing over three-lap heats.

“In the final the 500 EXC got a decent start and I held on for a podium position in the final. I was happy! Going into it with the preparation I had, and the fitness level I have, I would have been happy just to make the final, so the podium was a bonus and it probably gets me a little bit keen to do it again next year to be honest.”

How trick are these Samco silicone hoses? […]