Yoshimura Suzuki Factory Racing’s James Stewart announced today that he will sit out the last three rounds of the 2013 AMA/FIM Supercross Championship season in order to fully recover from injury. 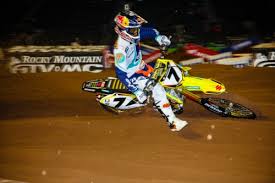 At last weekend’s Minneapolis race, the Yoshimura Suzuki rider suffered a get-off and tweaked the wrist he’d initially injured at the end of the 2012 AMA Pro Motocross season. He expects to be rested, rehabbed and ready to race at the season-opening round of AMA Pro Motocross in May.

“The decision to sit out the last few races is a tough one for all of us,” said Stewart. “The Supercross season hasn’t been going the best, but I’ve been having a great time racing, thanks to the fans and my Yoshimura Suzuki team. They’ve all been supporting me the whole time. So to have this last little injury – I hurt my wrist in the heat race and then again in the main event – was a disappointment. I think this is the smart decision for us overall and now I’m going to focus on recovering and getting ready for the motocross season. I’m psyched to be on the gate for Hangtown and now I just want to get the 2013 AMA Pro Motocross Championship.”

Although Stewart’s 2013 Supercross season ended prematurely, the Yoshimura Suzuki rider turned in a solid performance, nonetheless. With his win at Atlanta’s Georgia Dome, Stewart became one of just three racers ever to have gone nine straight seasons with a win. Additionally, the 2013 Supercross season saw Stewart race his Yoshimura Suzuki RM-Z450 to podium finishes at both the St. Louis and Indianapolis events. Finally, Stewart won eight of his heat races this year and he was the fastest qualifier at seven events.

Yoshimura Suzuki Factory Racing’s next race is round one of the 2013 AMA Pro Motocross Championships on Saturday, May 18th, at the Hangtown Motocross Classic in Sacramento, CA.

Entries are now closed for round four of the 2013 Dirt Action Amcross series to be held at Young, NSW. […]

KTM Australia’s race team manager Rob Twyerould takes us through a behind the scenes look of the team, the longterm relationship between Motorex & KTM and the products they rely on to perform at the […]

The rider will race a KTM 250 SX-F alongside new teammates Ryan Dungey and Marvin Musquin. By Hayden Gregory Canard is a former 250SX East and 250MX champion, who will join the team as part […]