Ultimate Off Road Round Up: We test a bunch of bikes considered the best of the best in the trails.

The 250F enduro market isn’t exactly on fire anymore. Perhaps because the 350Fs initially stole more sales from this category than they did from the 450F, and given the best 250Fs also come from the same factory as the best 350Fs, then things get a bit incestuous (the game the whole family can play).

That said, the 250F has never been better than it is now and we reckon the Husky has it nailed. The reason we like the little one is the same reason we like the big one (501) – the suspension. It was a tough call because the KTM 250EXC-F is a great bike that bagged some needed and excellent upgrades this year.

To get the most out of a 250F you have to treat it mean and that can only ever happen to the extent the suspension allows. The stock legs on the 2014 Husqvarnas are the best in the business for taking a stock bike and pushing it hard.

The engine on the FE is brilliant though, so let’s not give all the kudos to the suspension. It’s torquey as you’d expect, but has a turn of speed that’s surprising and highlights just how far the Japanese have fallen behind in this market. A WR-F or CR-F would have little chance of matching the FE in straight trim.

The FE250 is a bike that offers a lot for a wide range of riders. It’ll be overlooked in favour of the bigger models by blokes that could ride the 250 faster and longer, but that just seems to be the market in Australia at the moment – cubes rule. We recommend giving the FE250 a run before you automatically throw coin down on a 450.

I kind of lost interest in the 250F market when the 350 arrived. The Japanese models are firmly in the trail category now and while the Kato 250EXC-F is a great bike, it feels too soft for my liking. The Husqvarna allows you to find that missing piece by providing a suspension/chassis package that begs to be flogged and handles so well over a massive range of tracks. It excels on tricky shit and it’s capable of really nailing fast and open sections, too. It’s the best overall 250F package I’ve ridden. The engine is great, the suspension is as good as stock gets, and the brakes are brilliant. Go, turn, stop … the Husky does it all best. – Damien Ashenhurst 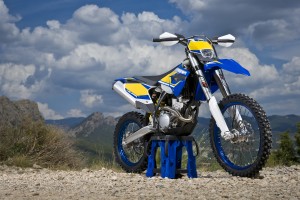 I was blown away when I rode the Husky; it sticks like glue through the tight and technical single track and has plenty of power to get the job done. You get a real kick out of riding this hard. I’ve been bored on 250Fs in the bush before; I feel like they aren’t exciting and always pretty softly sprung for someone of my weight (95kg). However, the FE250 is a stand-out. It has a strong engine that is more than enough for the average bloke and you can hit obstacles hard and not be punted into a catastrophic mistake. Where we shot and tested the FE had one pretty long, not steep, but rocky and shaley hill climb and it wasn’t even a slight issue on the FE250. It just ate it up. – Matt Bernard

Put your ego aside and try one.

Trim the back of the fork guards for removal without the forks.

Better suited for the average trailrider because of the softer suspension, the KTM received engine upgrades that made it a better bike in 2014. It’s a proven machine with the 2013 world enduro title to its name. The softer set-up makes it more comfortable on the trails.