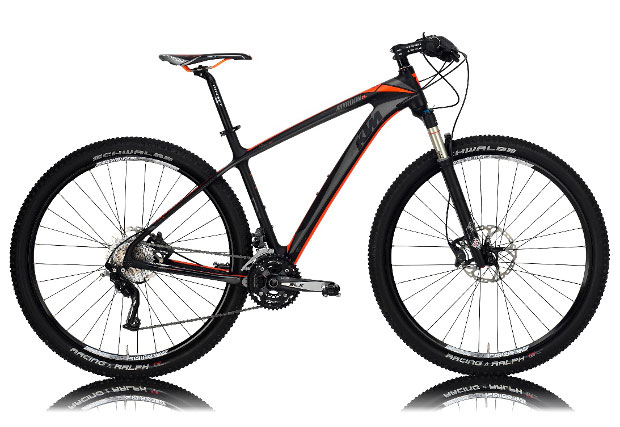 Mountain bike riding is an excellent form of training for dirtbike riding — plus, it’s bucket loads of fun. I knew KTM made mountain bikes, but to be honest I thought they had a couple of bicycle models for the true KTM fan to match with the rest of their orange wardrobe rather than a serious bicycle brand with a complete range.

How wrong I was. KTM has a complete range of mountain bikes and road cycles from entry-level to the very serious bicycle. I was lucky enough to take the full-carbon KTM Myroon 29er over the summer break and racked up some kilometres on it to see how much fun pedalling a KTM can be. The KTM Myroon 29er, as mentioned, has a monocoque carbon frame which makes it as light as a feather. This is not just a gimmick; it doesn’t just feel light when lifting it into the van. On the trail, the bike floats nicely along, ducking and weaving through the trees. Combine the 29-inch wheels and the carbon-fibre frame and you have a bike that handles dirt trails and the odd downhill with ease.

I spent a lot of time on both cycleways and also on the trails and found the bike to be at home on both. It’s not a one-disciple machine. The bike is built for cross-country and performs well on both the tar and the dirt. The hydraulic disc brakes are very impressive. Brakes of this quality would have been stopping a 100kg motorbike 25 years ago; now, it’s pulling a featherweight mountain bike up in the shortest amount of time humanly possible. The KTM bike turned some serious heads while I was riding it around. Like me, a lot of people weren’t aware that KTM made pushbikes, so that alone gets attention. Throw in the impressive quality and paint job on the KTM Myroon 29er and there’s no wonder it attracts passers-by.

The KTM features Rock Shox Reba 19 RL forks which are lockable for hitting the cycleways and cruisey trails. The headset, seat post, stem and handlebars are all Ritchey brand and, adding to its impressive list of componentry, Shimano products are used throughout the KTM.

I had an absolute blast on the KTM Myroon 29er. The KTM brand is taking Australia by storm and dealers are popping up each and every day. The product is of the absolute highest quality and I’m looking forward to the next time I get the chance to pedal around on a KTM bicycle. — Matt Bernard

After nearly six seasons of racing in the Supercross Class, L&MC Racing Honda’s Andrew Short, captured his first career AMA Supercross win, as the series swept into Seattle’s CenturyLink field for the 15th round of the series. […]

The KTM rider claimed his first overall victory for the 2016 season. […]

Wade Kirkland will not make the trip as an MX2 wildcard. […]