Tyre choice is mostly a personal thing that’s influenced by the way you ride, the way you set up your bike and the terrain you ride on. 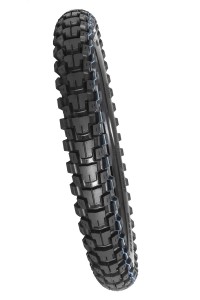 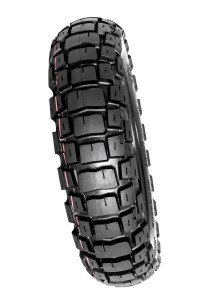 There aren’t any tyres that can do all things in all places for all people and that’s why riders tend to stay close to a tyre that works for them.

We spent a heck of a lot of time on a tyre that at first glance, didn’t seem like it would work for us. The Motoz Mountain Hybrid looks a lot like a trials tyre with its close, upright and uniform formation nobbies and that’s a reasonably accurate assessment that becomes clearer as time goes on.

We tested the Mountain Hybrid on a bike that’s known to eat rear tyres for breakfast, the Husqvarna TE300, and we tested it with a clubman rider, an expert rider and in both wet and dry conditions over many months and what we learnt is that it’s tough to kill and finds traction in places and in amounts that borderline make no sense. At times on the trail, you see an obstacle and your brain accepts that the rear may step out or let go and pre-empts this with a counter-measure which may be a body movement or a response through the throttle. Now imagine seeing that obstacle and totally accepting that something’s going to let go and yet you hook up and drive, sometimes to the point where you have bring it back from a loop-out. That’s what riding with the Mountain Hybrid is like – it truly hooks up when you don’t expect a tyre should. The only time we felt with any consistency that the Hybrid didn’t feel completely solid was when you cornered right out on the edge. Our test riders were split in one area which was hard pack. One of our guys (the expert) thought the tyre had plenty of traction while out clubman tester thought a traditional knobby was a better choice. But interestingly, both agreed that it was amazing on hills even in the hard pack. Once we got into anything vaguely loamy or wet though, both riders agreed that the Hybrid was epic.

The tyre started to degrade through use a little faster than usual but then plateaued and stayed pretty much the same for a few rides until it again started to show signs of wear. We’d already done a lot of work on it by this point and normally we’d say thanks and throw another tyre on but we persisted because the grip level was still good and we were curious as to how long it could go for. By the time we did retire the Mountain Hybrid some months later it looked beaten to within an inch of its life and had served well beyond other brands we’ve tested and honestly kept gripping even after it started looking like a meth addict’s mouth. The only thing we did notice happening was a loss of grip out on the edges which isn’t the Hybrid’s strongest point but you need to tip-in pretty damn hard to find that point and it’s nowhere near as bad as on a straight trials tyre.

We have been super impressed by the Mountain Hybrid in both the way it grips and the way it’s lasted. We have on average run about 12-14psi in it which depending on where you ride seems to be spot-on but we’ve heard of guys running 10psi consistently and not seeing any punctures.

After running the tyre on hard pack, sand, single trail, open tracks and everything in between we can honestly say that Motoz has a ripper on its hands in the Mountain Hybrid.

About Damien Ashenhurst 1715 Articles
Managing Editor of DIRT ACTION magazine. Damo doesn't like cheese or ISIS. Can often be found riding in mud because it's closest to the natural environment of a squid.

Stopp brake discs offer a comprehensive range for over 5000 road and off road motorcycles models dating back to 1980 up to current models. […]