2015 FIM Motocross World Champion Romain Febvre has continued on his winning way, adding the Grand Prix of Mexico to his yearly scorecard. 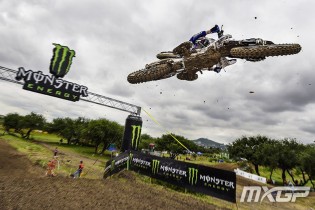 The victory marked Febvre’s 14th race win for the season including 12 consecutive podiums and seven grand prix overall’s. The statistics continue to add up for the Yamaha rider who made easy work of the muddy track for a perfect 50 point score; his fourth of the season.

“It’s never easy but this one was really good, I enjoyed the track”, Febvre said. “This morning it was really muddy but the second race the track was perfect and I had a lot of fun.”

“The track in the second race was how every grand prix should be. There were a lot of lines to pass and I didn’t feel stressed, I felt smooth and comfortable. Overall it’s just nice to show I can run up front and I can be on the podium and show good speed, not only in the sand,” Simpson said.

Simpson sits 58 points behind third placed Evgeny Bobryshev meaning he will not be able to contend for the overall championship podium in Glen Helen with only 50 points up for grabs. The battle will continue between Bobryshev and Frenchman Gautier Paulin to decide the remaining two podium places. Paulin currently holds onto a 27 point buffer.

The MX2 saw a new round victor in Thomas Covington. The Monster Energy Kawasaki Racing Team member produced a brilliant result with a fourth place finish in moto one before taking out the chequered flag in moto two.

Championship leader Tim Gajser recovered from a first race crash to finish with a (5-2) result. Gajser’s hold on the championship lead looked to be under enormous pressure following victory in moto one by second placed Pauls Jonass. The Red Bull KTM rider gained 9 points on Gajser and was looking like a man on a mission before a horrific second race crash saw him drop a number of places. Jonass can count himself lucky he walked away from the crash unharmed.

With one round remaining the MX2 will make for an exciting spectacle in Glen Helen. Less than 20 points separates Gajser and Jonass while Max Anstie will look to cement his third placing.

Australian duo, Dean Ferris and Todd Waters, have finished in the top 10 at round 15 of the 2015 FIM Motocross World Championships in Mantova, Italy. […]

KTM has inked a deal with Alfredo Gomez to join Jonny Walker for the 2016 Extreme Enduro series. […]