SI RACHA (Thailand), 10 March 2013 – The second Grand Prix of the 2013 FIM Motocross World Championship took place today at Si Racha, Thailand, for the first time in the History of the series and Antonio Cairoli and Jeffrey Herlings were the ones who dominated the event. 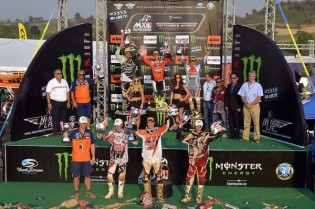 Cairoli once again won the Super Final and Jeffrey Herlings improved the seventh position he obtained in Qatar and finished fourth against the MX1 bikes.

Jeffrey Herlings was the best MX2 rider in the Super Final and he was also the MX2 overall winner. Romain Febvre was second overall in the Grand Prix and Jose Butrón completed the top three after making two consistent races.

Red Bull KTM Factory Racing’s Jeffrey Herlings could not take the holeshot of the first race but after the second corner he managed to overtake Romain Febvre easily. The red plate holder rode consistently at the front and he crossed the finish line with forty seconds advantage on the second classified.

Wilvo Nestaan JM Racing KTM’s Romain Febvre obtained the GET Athena holeshot Award after another fantastic start. The French young rider rode a solid moto and he kept the second position until the chequered flag.

The first MX2 race was really tough for Rockstar Energy Suzuki Europe’s Max Anstie because in the first half of the heat he got stuck behind Jose Butron and it was not until the eleventh lap that Anstie could overtake the Spaniard. In the end Anstie was third and he entered really motivated in the Super Final.

Monster Energy Yamaha’s Dean Ferris could not start at the front, but he managed to finish fifth in the first race. His teammate Mel Pocock broke his goggles before the start and he had to enter the pitlane right after the gate drop to get a new ones. The British rider gave all his best and he ended fifteenth.

Jordi Tixier could finally take part in the races today, as the cut on his chin was much better. The French rider thanked all doctors that treated him yesterday in the track and in the hospital in Pattaya because they did a really good job and today he was ready to race. In the first heat Tixier gave it all and he managed to move from eighth to sixth.

Glenn Coldenhoff was seventh followed by Alessandro Lupino and Christophe Charlier. Petar Petrov rounded out the top ten of the first MX2 race.

Red Bull KTM Factory Racing’s Antonio Cairoli obtained the GET Athena holeshot but he got arm pump in the first corners of the race and he dropped down to third. After a few laps the Italian started feeling better and in lap nine he took back the lead and kept it until the chequered flag.

His teammate Ken De Dycker also had a good start riding third during the first laps of the heat and when Cairoli slowed down his rhythm, De Dycker moved up to second place. After two laps Evgeny Bobryshev, who was leading the race, made a mistake and dropped down to third, so De Dycker became the leader of the race. However, when Cairoli recuperated his speed, De Dycker could not keep the lead and the Belgian rode second until the end of the race.

The third position was for Rockstar Energy Suzuki World’s Clement Desalle who rode fourth during most of the race and he managed to move up to third when there were only two laps to go. The Belgian suffered a big crash when he was riding third, but fortunately he could go back quickly on his bike and kept the position until the end.

Kawasaki Racing Team’s Gautier Paulin did not have a good start in the first race but he made an incredible recovery from tenth to fourth. The French rider felt really well on his Kawasaki and the way he rode the first moto said it all.

CLS MX2 Kawasaki Monster Energy Pro Circuit’s Tommy Searle started sixth behind Rui Gonçalves and after four laps the British rider managed to overtake the Portuguese rider. However, after some laps Paulin was coming really strong from behind and Searle dropped down one position.

David Philippaerts had a really good first race and he ended sixth ahead of Strijbos, who had an incredible recovery from his initial eleventh position. Rui Gonçalves finished eighth and Steven Frossard and Joel Roelants rounded up the top ten.

Evgeny Bobryshev had a fantastic start and managed to lead the race during the first five laps but he made a mistake when he was at the front and De Dycker and Cairoli overtook him. The Russian was riding a consistent moto in third, but he suddenly started feeling dizzy due to the heat and with two laps to go, he went from third to last.

Jeremy Van Horebeek keeps on struggling with his thumb and he could only finish fifteenth in the first race.

Once again the Super Final was the most  spectacular race of the weekend and with the grid completely full with the best MX1 and MX2 riders it was Antonio Cairoli who took the holeshot and dominated the heat until the end. Gautier Paulin started the Super Final being third behind Desalle but in the end of the race he managed to make a move on the Belgian rider and he crossed the finish line second, which gave him the second overall position in the MX1 class. Clement Desalle finished third in the Super Final and third in the MXGP and during the press conference he highlighted the outstanding treatment he received by the doctors at the medical centre of the track after the first race, which let him race with almost no pain.

Jeffrey Herlings was once again the best MX2 rider in the Super Final but this time he finished fourth ahead of Tommy Searle. The Dutch rider was very satisfied with his race and he explained that he could have overtaken more riders if he had had a 450cc machine.

Romain Febvre rode in top ten most of the race, but in the end he finished eleventh being the second best MX2 rider in the Super Final. Christophe Charlier was the third best MX2 classified rider in fourteenth and Alessandro Lupino was the fourth one in seventeenth.

Type of ground: Intermediate to soft

Motorcycling Australia (MA) is pleased to announce the dates for the 2012 Australian Supercross Championship. […]

Reardon Checks Out for Jimboomba Victory

In front of a capacity crowd, Dan Reardon trumped the SX1 field to win the second round of the Australian Supercross Championship while Jimmy Decotis made it two round victories in a row in SX2. […]