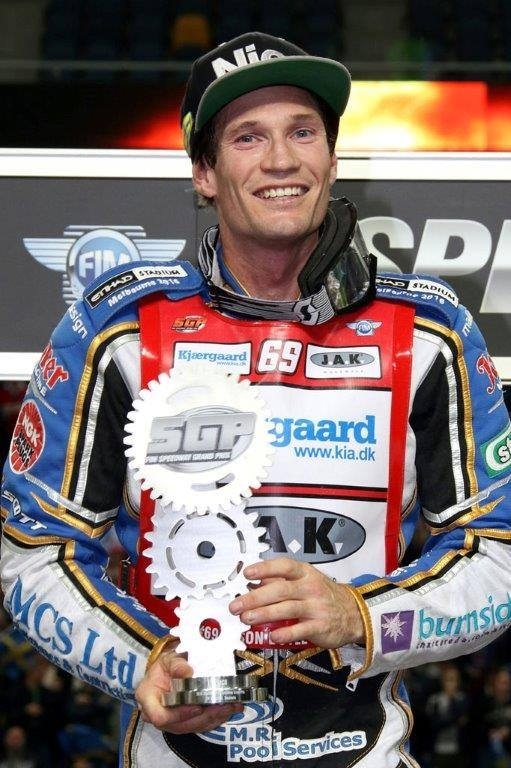 Doyle entered Friends Arena in Stockholm trailing Chris Holder by five points in the championship. By night’s end the Aussie had a five point lead of his own, notching his fourth Grand Prix win of the season. It has been ten years since spectators have seen a rider take three Grand prix victories in a row and that record belongs to the one and only Jason Crump from 2006.

“To win four SGPs this year is special.” Doyle exclaimed. “I can’t really comprehend what I have achieved at the moment. I still have a long way to go, but to win three GPs in a row is unbelievable.

“When I had gate one in the final, I knew I had to stick to the inside. I knew they were going to try and go around me and it would be a pretty desperate first corner. I stuck to my own plan and it worked again.”

Doyle now leads the championship standings with two rounds left to race. Greg Hancock and defending champ Tai Woffinden remain within striking distance and the Australian accepts he will need to be at the top of his game to claim the title.

“We know what’s going to happen in the next two rounds. It’s going to be very difficult. We came to this Grand Prix trying to bag the points and if we can go and make a final in the next couple, we’ll be up there in the end. Tonight sealed the deal that I’ll be in the GPs next year, which is a massive achievement that I set out to do at the start of the season. We can park that one and go for something in the future now.”

The series will head to Torun next Saturday before Doyle has the chance to be crowned the first Aussie World Champion on home soil, with the finale hits Melbourne’s Etihad Stadium on October 22.

“This is what we need for Etihad Stadium – to have some Aussies up there in the title chase. We need to show we’ve got some really good Australian riders in the World Championship.

“We’re going to go to Melbourne, do what we need to do to up the sport, get as many people as possible in the stadium and put on a good show.

“I’ve been riding in Europe for over 10 years now. But to go to Melbourne and have 90 percent of the stadium shouting for me and Chris is awesome. It’s a really good feeling to get your name called in front of that many fans. You get the goosebumps and you get a bit emotional. After what happened in the final last year, hopefully I can do something special,” Doyle finished.

No Hurdle too big for Motul Pirelli Sherco Factory Team

The road hasn’t been easy for Motul Pirelli Sherco Factory Team this year competing in the Australian Off-Road Championship (AORC) after a disastrous fire earlier this year destroying almost ten years of hard work, which […]

Results: All the Moto X Events from X Games

02/07/2012 Damien Ashenhurst NEWS Comments Off on Results: All the Moto X Events from X Games