Jesse Dobson will join Husqvarna next year as part of the MX1 Factory Support program. 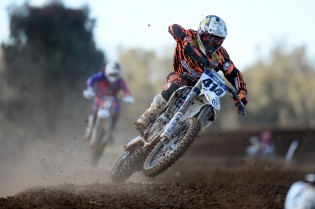 The 18 year old is one of the most promising young riders in Australia and he has already shown that he can mix it with the best in the premier class. Dobson finished fifth in the 2014 SX1 title chase as a KTM guest rider before switching to Husqvarna for this year’s MX Nationals.

With an impressive run Dobson claimed six top-five finishes before an injury drew an abrupt end to his season. Despite missing the final two rounds Jesse hung onto 10th place overall in the series, something he is determined to better heading into 2016.

A torn meniscus in his knee left Dobson on the sidelines for the rest of 2015 and with rehabilitation nearly complete Jesse is set to re-establish himself in the premier class on the Husky FC 450.

“It feels great to be on board once again,” Dobson said, “I’m really confident in Husky and I’m pumped to be on board with a great brand. I think with the new bike, and a little more support, we can definitely get some podiums and look towards that top step. I was pretty disappointed that I missed out on seeing a podium this year, and to have my year cut short with injury, but next year I know that I’m going to be 110% going into it.

My recovery has gone really well and I’m just looking forward to beginning testing on the 16s and going into the season nice and strong.

Dobson will team up with new SD3 Husqvarna recruit Jacob Wright, completing a strong MX1 outfit for the manufacturer.

Intense is one word that sums up today with temperatures soaring so high, to the point the Event Management team together with the team managers decided to reduce both MXGP and MX2’s second race by five minutes. […]