The Australian rider has had a mixed start to the 250SX West season impressing in Anaheim before struggling to keep pace in San Diego. 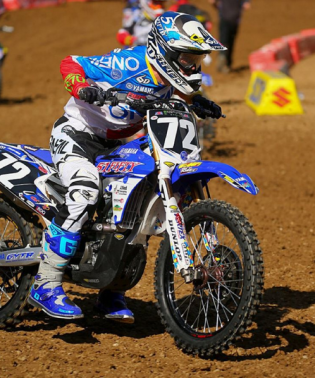 In the opening round of the AMA Supercross season Mellross was a surprise packet not only making the main event but also claiming an eleventh place finish for the night. The 51Fifty Energy Drink Yamaha rider was ecstatic with his result and looked to build upon a possible top ten finish in round two.

The night started well as the Aussie ran fourth in his heat qualifying for his second straight main. With confidence at an all time high Mellross exploded out of the gates in the final, working his way around the first corner in a top three position. Unfortunately a few more turns in and Mellross was forced off the track by another rider and in trying to recover he crashed in the soft dirt.

From that stage on Mellross never quite looked in it and another crash in the whoops left him in 21st place for the night.

“My starts were on point all night,” Mellross stated post San Diego. “Our bike is so good and I’m glad I was able to run up front for a while.

“You live and you learn, that’s all part of being a rookie. Each week we’re making improvements and I’m confident the best is yet to come.”

Not to dwell on the result the 20 year old is already looking ahead to Anaheim two. He has proved he can run up front with the fastest guys and he is set on a top ten finish.

Motorcycling Australia (MA) is pleased to unveil the draw for the 2016 Australian Speedway Senior Solo Championship. […]