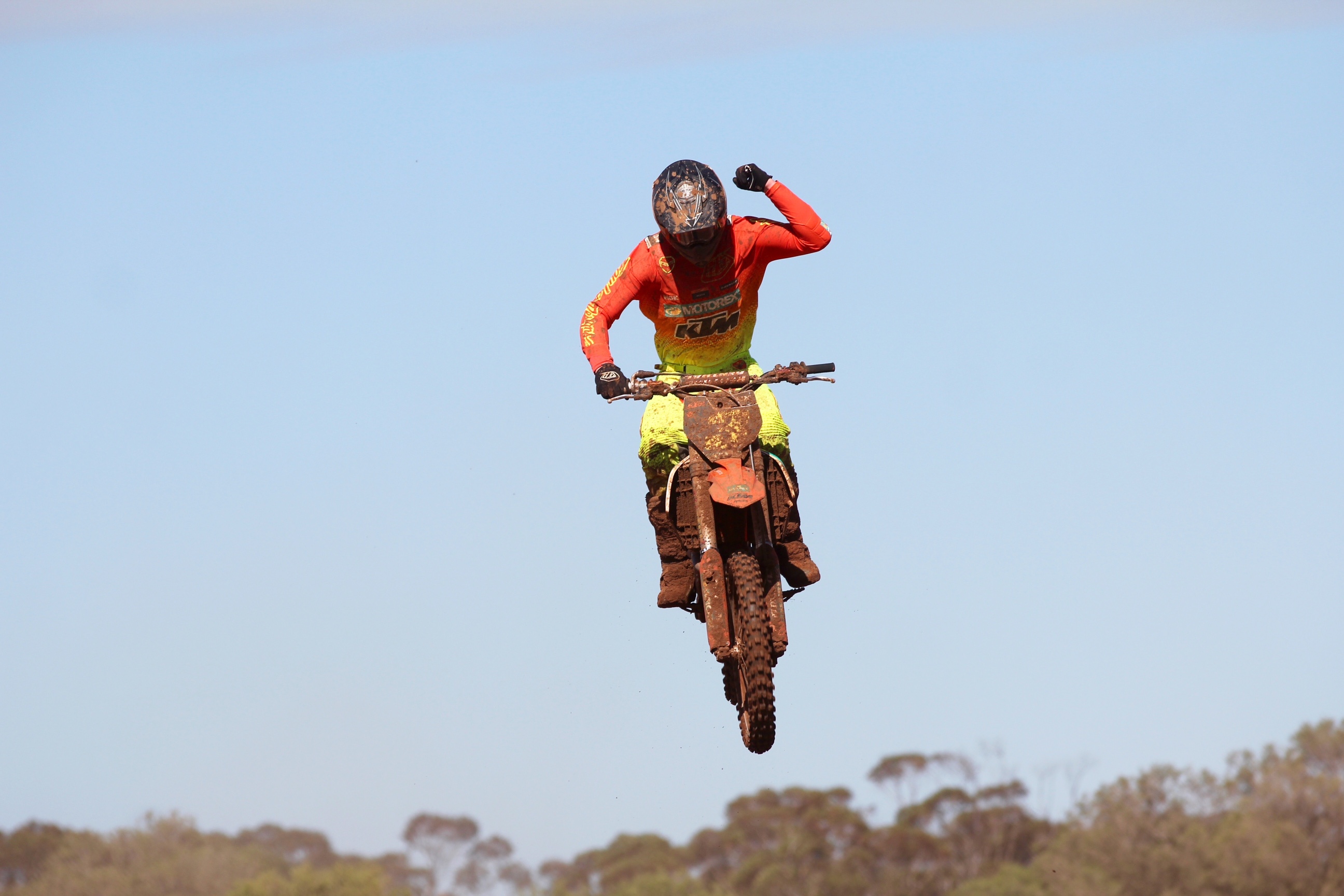 After some fantastic racing at the Riverland Junior Motorcycle Club this morning, the action on track continued well in to the afternoon, with Mason Semmens, Tahlia O’Hare, Bailey Malkiewicz and Zachary Watson all crowned 2016 Australian Champions in their respective classes.

For the first time this week, when the 128-150cc/200-150cc 13-U15 Years class riders headed to the line, competitors were armed with the knowledge that when the chequered flag flew that an Australian Champion would be crowned.

From the minute the gate dropped, KTM’s Mason Semmens and Rhys Budd showed that they were at Renmark for business, jetting off in to the top two positions ahead of John Bova and Korey McMahon.

Despite every effort from Budd to make a pass on Semmens happen, the KTM mounted leader was just too quick on the rough and rutty surface, and by the time the chequered flag was displayed, Semmens snatched up the very last final win by 36 seconds. Budd wrapped up the moto in second position ahead of McMahon in third. Levi Rogers, and John Bova finished in fourth and fifth places.

But with four final race wins, it was Semmens who’s last victory saw him awarded with a 2016 KTM Australian Junior Motocross Championship. Budd was crowned the runner up in the 128-150cc/200-250cc 13-U15 Years class with his consistent results, while Regan Duffy took third in the overall 2016 championship.

The youngsters in the 50cc class had one seriously challenging track to contend with when they headed out for their second final at Renmark this afternoon.

But regardless of what they were faced with, the competitors showed that they know exactly what motocross is all about. Kayden Minear managed to assert his authority throughout the seven-minute moto, making the pass on Kayd Kingsford on lap two to eventually cross the line with the race win.

Kingsford wrapped up his second 50cc final in second position ahead of Jett Williams and Jake Cannon who both finished in third and fourth positions. Billy Cameron, Nate Thompson, and Oliver Paterno, all concluded the 50cc race inside the top ten.

It was the number 2 machine of Tanesha Harnett who shot off to the early race lead in the last final today, ahead of Ebony Harris and Tahlia O’Hare. But with a 2016 Championship on her mind, O’Hare began to apply the pressure on Harris for second – a battle that lasted the entire ten minutes.

But when the chequered flag flew for the last time, it was Harnett who collected the last race victory. Harris held off a hard charging O’Hare for the entire race to finish in second, while O’Hare concluded her last final in the 85cc/150cc 12-U16 Years class in third. Madison Healey and Kara Cats finished in fourth and fifth places respectively.

But a third place in the final moto was all that was required to reward O’Hare with a 2016 Australian Championship at the conclusion of today. Harnett collected second overall thanks to her win in the final race, while Harris’s consistency paid off – the youngster rewarded with a third in the championship for her efforts this week.

The 65cc 9-U11 Years class had their first chance to hit the track at Renmark late this afternoon, and after finishing in second in his 85cc final this morning, KTM’s Noah Smerdon continued with his form in the 65cc race too.

After leading from the minute the gate dropped, Smerdon stayed smart and consistent throughout the seven lap race to keep Ryder Kingsford, and Jett Burgess-Stevens at bay.

And when the chequered flag was waved, Smerdon collected an unchallenged victory. Kingsford crossed the line in second position ahead of Burgess-Stevens, while Seth Burchell wrapped up his second final in fourth place .

The 85cc/150cc 14-U16 years class headed out for their 2016 KTM AJMX decider this afternoon, and riders were treated to tacky and grippy track conditions for their last final of the championship.

After suffering bike issues throughout the week, Bailey Malkiewicz only had one option in his last race and that was to win. So with a victory on his mind, the Husqvarna rider burst out of his gate and in to the race lead ahead of John Bova and Tyler Darby.

With Malkiewicz out in front, Bova and Darby started their battle for second position, but unfortunately their fight ended prematurely with the pair crashing in the front section of the track, handing second place to Michael Murphy.

But thankfully for Bova, the young rider still had plenty of energy left in the tank, and as the race reached its closing stages, Bova made the pass on Murphy for second where he stayed for the remainder of the moto.

But the man of the moment was Malkiewicz, who not only took the final race victory but collected the 85cc/150cc 14-U16 Years 2016 Australian Junior Championship. Second in the final race was Bova, followed by Murphy in third.

With Malkiewicz crowned champ, Bova walked away from today as the 85cc/150cc 14-U16 Years runner up, while Darby finished in third overall at this year’s KTM AJMX.

It was Liam Atkinson’s time to shine in the 65cc 11 years KTM AJMX championship decider this afternoon, and despite the temperature dropping and the wind picking up, the young riders showed real maturity throughout their seven-minute race.

After only one lap, Atkinson moved in to the lead position where he remained for the entire race. Angus Riordan put in one of his most impressive rides of the week to cross the line in second position, while Deegan Mancinelli clawed his way back from fifth place to eventually wrap up his last race in third.

But despite not placing in the top three in the final race of the week, fifth this afternoon was all that was required to reward young Zachary Watson with a 65cc 11 years Australian Title. Second place in the overall standings was taken by Mancinelli, while Myles Gilmore’s consistent results saw him awarded with third in the championship.

The younger 65cc competitors were the final class to head out to race at the Riverland Junior Motorcycle Club at Renmark today, and with the track relatively dried out after a full day of racing, riders were treated to deep ruts, and huge breaking bumps.

Kayden Minear was once again impressive throughout the second 65cc final, fighting off the likes of Jet Alsop throughout the final lap to eventually cross the line with the race victory.

Kayd Kingsford finished in second position at the conclusion of the moto, while despite battling for the lead for a period of time, Jet Alsop dropped back to third position.

New Zealand’s Cole Davies finished in an impressive fourth while Liam Owens wrapped up the final race of the day in fifth position.

Racing for the 2016 KTM Australian Junior Motocross competitors will continue tomorrow morning at the Riverland Junior Motorcycle Club at Renmark in South Australia.

A crowd of over 5000 turned out to see a spectacle like no other as 23 invited guests of Australia’s triple World Superbike Champion put on a show at the inaugural Pixado Troy Bayliss Classic. […]

Securing Gold in the men’s Enduro X event at the Los Angeles X Games Taddy Blazusiak brought his participation in the 2013 X Games tour to a perfect close. […]