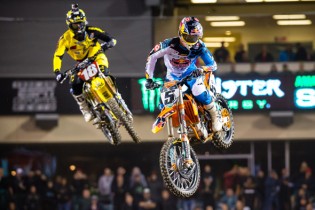 Dungey, who secured his position in the Main Event via the final transfer position in the Last Chance Qualifier, became the fourth different winner in five races this season and moved into second place in season standings. Millsaps finished second and holds a 14-point lead over Dungey. Barcia, who did not finish the last two races, finished third.

“We felt some emotion coming into tonight’s race after barely making it into the Main Event,” said Dungey. “The team was sweating it, but we pulled it off. It’s a long season and this is a big step for the team.”

Rookie Joey Savatgy won the Nuclear Cowboyz Holeshot Award aboard his JDR/JStar KTM to start the Western Regional 250SX Class Main Event with Roczen on his back wheel in second place. Roczen quickly moved into the lead on the opening lap as he passed Savatgy. Defending champion Eli Tomac, who rides for the GEICO Honda team, started near the middle of the field but moved into fourth place on Lap 5.

“I need to keep this up and take it to the next level,” said Roczen. “This has been a great two races for me, but the season is not over yet, so I need to keep the pressure on as we head to San Diego next week.”