As the AUS-X Open, prepares for takeoff; the much-anticipated track map has been released, with multiple changes expected to create some incredible racing for 2016. 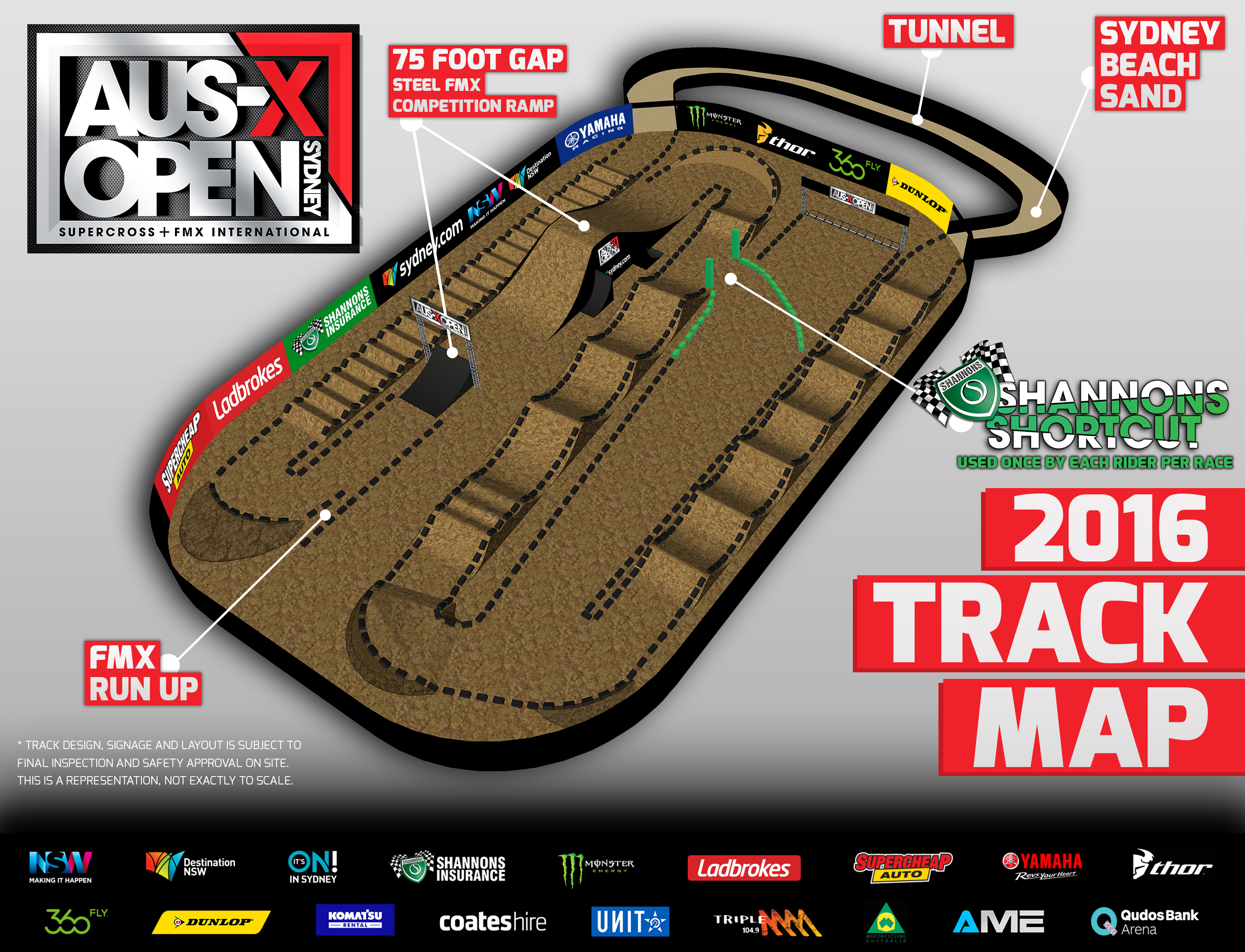 The AUS-X Open circuit includes elements that are unique to any other current supercross event in the world. The inclusion of steel Freestyle Motocross (FMX) competition ramps, see riders catapulted towards the stadium ceiling, lap after lap, side by side.

The addition of the AUS-X Open ‘tunnel’ not only extends the racing surface by over 100m, but provides some of the best passing opportunities upon re-entry into the stadium arena.

For 2016, further revisions have been made to ensure maximum usage of the 4,000m2 floor space, which will in turn create some of the most intense supercross action Australia has ever seen.

The most significant change for 2016 appears in the tunnel, as the unique custom made passage underneath the stadium seats (passing the venue store rooms and back of house) will be filled with ‘Sydney Beach Sand’ this year.

Sand sections have been renowned worldwide for keeping the world’s best riders on their toes, and spectators can expect to see riders struggle to navigate their way through ever moving sand within the Qudos Bank Arena walls. Margin for error will be non existent.

The circuits ‘rhythm section’ will feature a unique combination of jumps that vary in size and distance throughout the length of the stadium floor, to allow the greatest riders in the world to display their creativity and deadeye precision. A range of combinations will be available to all riders, ensuring the lane will be a great time and skill separator.

2016 sees the return of the unique shortcut lane, which will be titled the ‘Shannons Shortcut’ for this year’s event, courtesy of leading motorcycle and automotive insurer – Shannons Insurance.

The shortcut lane was responsible for some of the most incredible action supercross has ever seen in 2015, and is set to be no different for this year’s event. The Shannons Shortcut provides riders one chance per race, to miss a crucial section of track and gain an advantage over the competition. The timing and usage of the Shannons Shortcut will come down to strategy for the individual rider to decide!

Two-time World Supercross Champion and Australia’s greatest-of-all-time, Chad Reed, has heralded the changes for this year’s event, and can’t wait to get out on track.

“As I have said before, I really think Qudos Bank Arena is perfect for Australian Supercross and the epic ‘show’ that is the AUS-X Open. There is no stadium in the world that gives spectators the same closeness that this arena does. They’re sitting right on top of us and can see every move, every pass and every mistake.

“I’m pumped to head down under and get amongst it!” concluded Reed.

The AUS-X Open kicks off at Qudos Bank Arena (formerly AllPhones) on November 12 & 13. Tickets start at $40.

A revolutionary track has been revealed ahead of the 2015 AUS-X Open set to take place in Sydney on November 28 and 29. […]

James Stewart has reversed his decision and will now be flying to Sydney to compete at the AUS-X Open. […]

Australian Supercross Champion Dan Reardon has been rewarded for his efforts resigning with the team for next season. By Hayden Gregory It was a fairytale finish for CDR Yamaha’s Dan Reardon who returned to Australian […]