Race you to the dealer: Light, agile, grunty and predictable we jump on the 2015 Yamaha YZ250FX 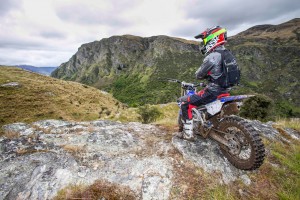 Huh? What do you mean? Well, it’s a hybrid that the Yamaha race engineers have created from those two models in what I imagined looked something like the scene from the first Mad Max where Mel Gibson meets the “pursuit special” in the underground carpark and the police mechanic tries to describe how he built it. In the mechanic’s words — not mine or Yamaha’ — it goes like this: “A piece from here and a piece from there.” Oh, how I love that movie!

Anyway, this may be a stroke of genius or a horrible mistake, though I’m positive it’s more of the first and less of the second. One thing for sure, this reincarnation will gain cult status among small-bore trail hunters in the near future — just like the Interceptor.

Where would you release such a bike and where could you unlock its tremendous potential or possibly expose its biggest shortcomings? New Zealand’s South Island or, to be more specific, Queenstown, where a picture-perfect day one minute can become a filthy test of human endurance the next. The locals are that pumped on adrenalin that trail bikes, mountain bikes, jet boats and numerous other extreme sports are just considered pastimes and getting retro is watching or even playing rugby or cricket.

The night of the YZ250FX’s presentation, we headed to Queenstown’s Skyline Adventure Park nestled on top of the mountain overlooking the town. There we sampled the world-famous Luge Ride and the 800m of madness didn’t disappoint, with numerous bench-racing stories for hours afterwards. I hope Geoff Ballard’s ankle is OK … 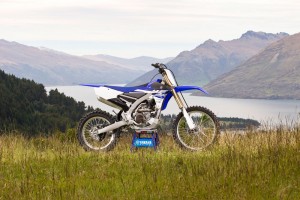 The concept & the differences
Yamaha’s aim was to make a lightweight bike with extra-sharp handling for the cross-country racer. The engine had to be torque-laden and powerful. It needed loads of traction and control plus the added benefit of Yamaha’s proven reliability.

Let me dispel those “it’s just a YZ” thoughts. No, it’s more like a WR — but it’s not. Josh Coppins, among other riders, and a team of Yamaha tech heads worked tirelessly on the engine and suspension settings to make the FX a viable option.

This bike is a purpose-developed racing machine that can still be ridden by amateurs and raced by professionals. The addition of a sixth gear and electric start are more than welcome and will be sought-after items when it comes time to put it on Gumtree in 12 months’ time.

The YZ250FX retains much of the look and feel of the YZ250F, more so than the WR250F — so much so it’s hard to tell them apart at first glance, apart from the silver rims and the graphics. On closer inspection, you’ll notice an 18-inch rear wheel, electric start system, six-speed transmission and a sidestand. There are other changes that I’ll make you aware of soon.

It may be easier to think of this bike as a WR250F without the lights. Mind you, this bike will appeal to everyone, from club level motocrossers who want a button start and can save on pistons with that sixth gear to pro enduro racers looking for a cheaper way to put a YZ into the E1 class. 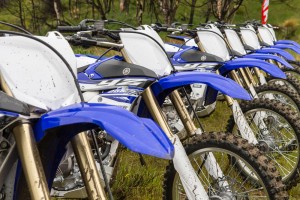 Engine
The engine performs very similarly to the YZ250F with a slightly stronger bottom-end feel. The midrange punch is still there and so is the over-rev in the top end.

On the trail, the engine will surprise with a linear delivery right across the rev range. This characteristic doesn’t encourage you to shift early or late but lets you choose how to ride it, which is great when you’re muscling a bike through an arid wasteland covered in green moss and wet tree roots.

The decompression system has been optimised for easier starting on the FX and the fuel injection system is the same as the YZ-F with a 44mm Keihin throttle body. The ability to use Yamaha’s Power Tuner ($400 rrp) to change settings on the fly is still there and something that more people should play with. Talking EFI, the FX has a revised ECU setting which would help complement the six-speed transmission and the electric starter.

The FX gets a YZ-F-style muffler and that may go a long way to explaining the power difference from the WR250F as well as the noise that comes from the WR’s airbox when in stock trim. Maybe the exhaust noise dumbs that down as it’s a fair bit noisier than the WR.

Either way, depending who you are, the drone might get annoying after three hours of racing through the bush. This was the only real negative I could find while riding the bike. Remember, I’m getting old. Imagine if all it took to fix every bike on the market was a set of $2 earplugs!

The clutch in the FX is different from the YZ-F’s, with lighter clutch springs, an optimised inner clutch hub for better oil distribution and two types of friction plates to deal with the demands of off-road clutch punishment.

A six-speed transmission really does help and the wide-ratio nature of the gearing also adds to the enjoyment the engine delivers while screaming along a wide open fire trail like the ones we rode on top of the Queenstown Hill.

A large-capacity generator pumping out 14V and 160W is mounted in the cases to provide enough power to run the starter motor and ECU but can also maintain the charge needed for the optional “competition kit” that contains a headlight, tail-light and horn. There are also an alloy bashplate and brush guards in the kit, aimed squarely at the recreation-registration market. The kit retails for $500. 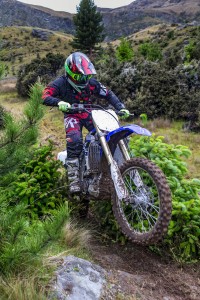 Suspension
Predictably, this is one of the most crucial areas of a motorcycle and most often that comes from a combination of geometry and suspension — not just one or the other but a combo. While not as firm as the YZ-F, the FX is supple and controlled through the initial first third of its travel.

This bike reminded me of that, giving me the confidence I needed in the unusual trails of New Zealand. Up front, the twin-chamber KYBs, using a set of 4.4Nm springs, seemed to glide over foliage and roots but still had the ability to soak up the big hits. The frame rewards a rider who sits forward in the cockpit with sharp handling and lots of predictability.

If you don’t tend to sit up front, you won’t get the best out of this bike’s geometry, even feeling an occasional loose front dive. But, trust me, it’s not the bike’s fault.

In the back is a KYB shock that feels plush enough to get you through technical terrain without feeling too soft. A 4mm-longer shock length helps add 10mm more travel than the YZ-F for added ground clearance and to aid in the handling.

I rode the bike in standard trim with the rebound and compression clickers set to their standard settings. Upon arrival I wasn’t even asked to adjust the static sag; I guess that shows the confidence Yamaha has in this model. 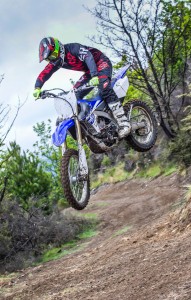 The Ride
The guys at Off Road Adventures had set up the ride plan with some extremely beautiful locations en route for us to check out. They’d even got approval from the local authorities to ride the FXs along the main road as part of our transport, giving us the ability to try the six-speed trans in all its glory.

Our ride plan changed the morning we arrived as there’d been a massive downpour overnight and cloud had settled in, which changed the photography schedule. We started with the purpose-made trails that wove their way through the Alpine Forest, climbing and descending faster than on a theme park roller coaster. This gave the chance to experience the engine’s torque, which I must say is extremely impressive given it’s a 250cc.

There was ample opportunity to test the brakes, up front all YZ250F with excellent feel and modulation and, at the back, a YZ-F master cylinder with WR250F caliper and rotor.

With a few root-littered turns throughout the floor of the forest plus a few sketchy off-camber grass-track corners, you could appreciate the stability. Compliant suspension and a set of Dunlop AT81 tyres that seem well suited to the terrain just added to the bike’s all-round good nature.

After a few hours of playing in the tight and technical Alpine area, we headed up to Queenstown Hill to check the bike’s ability at around 900m above sea level. To say it dealt with the elevation easily would be an understatement. Understanding that any power sacrifice from a 250cc can be an instant death sentence meant it was a pretty ballsy move on Yamaha’s part to take us there. Once on top of the Hill, the bike kept performing faultlessly, even allowing us to loft the front at speed for pictures.

Some things that may be a good addition to help “enduro-ise” the bike might be a sturdy alloy bashplate, brush guards or handguards, radiator braces and the WR’s thermo fan. Remembering that most of these are found in the competition kit may help you when haggling a price with your local dealer.

If I was located in Victoria and had the ability to get recreational registration to ride one of these legally, I’d be worried. Why? Because by the time you read this they’ll all be gone. The YZ250FXs are made for that middle-aged guy who loves riding trail and hates his 450cc beating him up by the end of the ride and doesn’t need full registration.

A controllable yet powerful engine in a responsive and predictable chassis with button start and it seems as light as a feather. I’m sold.