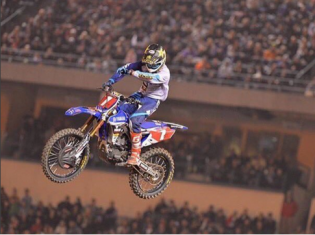 Cooper Webb has extended his points lead to 18 in the championship, a very concerning number for all other riders in the competition. Three rounds in, Webb is undoubtedly at the top of his game becoming the first rider in history to win four straight races in Anaheim.

GEICO Honda’s Jimmy Decotis scored the SupercrossLive.com Holeshot award before Joey Savatgy pulled into the lead by turn two. Like Decotis his lead was short-lived as Christian Craig claimed leading rights by the end of the first lap, with Webb back in fifth.

By Lap two Webb began making his way through the pack climbing to third before a Joey Savatgy crash left a clear path to second place. Out in front Craig was able to hold off Webb until lap seven when he made his first pas for the lead. From there a great battle ensued with the pair trading places a number of times before Webb landed the killer blow on lap ten.

Webb made the pass stick, placing a buffer between Craig and himself to claim another round win.

“It was an awesome race,” said Webb. “Once we (Webb and Craig) started battling, it was a fun race. It felt like we traded places like 10 times. I struggled all day and made some changes coming into tonight’s Main Event, and it worked out.”

Christian Craig looked defeated after Webb went by, opening the door for Zach Osborne to also come through and make the pass. A third place result still marked Craig’s best career finish in a race he can take a lot of positives from.

Round four of the 2016 AMA Monster Energy Supercross season will take place next weekend in Oakland.

I can’t ride without knee braces any more. Not only is it a psychological thing; I find it quite uncomfortable and it rattles my confidence every time I put my foot down. […]

After a huge two days of testing we’ve finished our motocross shootouts for the 2014 model range. […]