Motorex KTM‘s Todd Waters has reportedly injured his right shoulder in a large crash at the QLD motocross championships in Townsville over the weekend. 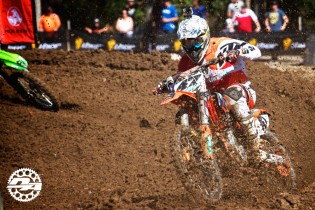 The crash was large enough to leave Todd very slow to get up, resulting in the race being red flagged and Todd being taken to hospital to get checked out.

A few photo’s of Todd in a sling have shown up via social media and word is he is currently undergoing surgery to fix the problem.

Everyone at Dirt Action has their fingers crossed for Todd that it’s not too bad and he won’t miss a round of the MX Nationals which return from a mid season hiatus on the 14th of July.

We will keep you posted on any more news..

02/12/2015 Ashley Diterlizzi NEWS Comments Off on Video: Mind and Motor with Eli Tomac