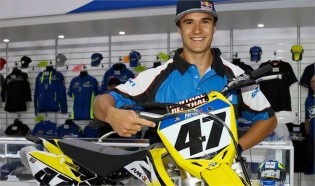 The former MXGP rider will use the four round series as preparation for the upcoming MX Nationals. The competition will start this weekend on January 31st and will be the perfect opportunity for Waters to get some time in on his new RM-Z450.

The Australian rider has returned home following a mixed MXGP career which saw him finish ninth in 2015. New Zealand will serve as his first ride out of the championship since 2013, joining teammates Brad Groombridge and Joaquin Fernandez.

“I love New Zealand, the people and the tracks – I’m really looking forward to racing there again,” said Waters. “It is also good preparation for me racing in the Australian Motocross Championships later in the year.

“The New Zealand riders are super-fast in their own country and Cody Cooper seems to be unbeatable in his own country, so we’ll have to see about that.”

“I’ve been riding the new Suzuki RM-Z450 since December last year and I’m feeling very comfortable on it. I raced for Suzuki in 2012, so it is exciting to be back on board one.”

Manager of the MC2 Suzuki Racing Team, Andrew Hardisty is thrilled with the arrival of Waters, in a move which will provide great confidence to the whole Suzuki team.

“It’s electrifying news, not only for Suzuki, but also for the entire MX1 class of riders in New Zealand to have a rider of his calibre on the starting gate this season.

“Suzuki has already proven it is a championship contender and having Todd riding alongside Brad and Joaquin gives us great confidence as we head into the championship season.”

BUD Racing in for Supercross

Mitchell Outram has had a fantastic day on the track taking the win in two classes at the 2015 KTM Australian Junior Motocross Championships. […]