Ryan Dungey has once again topped the 450SX main after leading start to finish in Oakland. 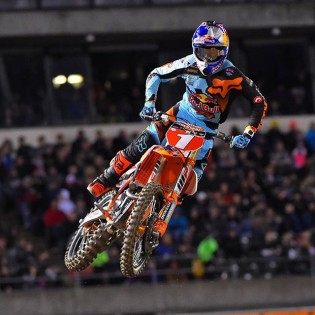 In a sight becoming all too familiar Red Bull KTM rider Ryan Dungey has topped the class extending his overall points lead in the championship. The American rider scored the SupercrossLive.com Holeshot Award in a worrying early sight for fellow competitors.

From the very first lap Dungey looked in control showing his class and maturity out in front. Following close behind was teammate Marvin Musquin and RCH rider Ken Roczen. The pair had a good battle for the remaining podium places until lap four when Roczen made his pass stick.

Places would remain unchanged for the remaining 16 laps, as Dungey extended his championship lead to 22 and Musquin landed his first premier class podium.

“To be able to get out front and find your lines early in the race is key,” said Dungey. “It’s great to see all of the hard work pay off.

“I am really happy for Marvin [Musquin], who is my teammate, for earning the first podium of his career. I train with him during the week, and tonight he proved he has the speed.”

Australian Chad Reed had another strong night on his Yamaha YZ450F locked in a race long battle with Cole Seely for fourth place. In the final few laps of the race, A1 winner Jason Anderson joined the fight managing to pass both riders before Reed also made the decisive pass on Seely to finish in fifth place.

Fellow Aussie Lawson Bopping made his third main event for the season following an epic LCQ race. The DPH Yamaha rider clinched a spot in the main before going on to claim a 17th place finish.

In other major 450 news Yoshimura Suzuki Factory Racing’s James Stewart once again failed to finish a main pulling out of the race after eight laps.

Australian supercross star Chad Reed has once again left a cryptic message for his fans suggesting a possible move to the MXGP for 2016. […]