The Tatts Finke Desert Race has won the Festivals and Events category at the 2015 Brolga Northern Territory Tourism Awards. 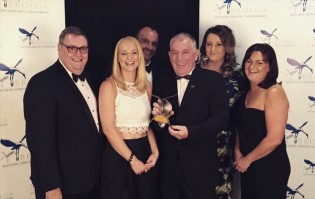 At a gala awards ceremony held in Alice Springs attended by representatives of the Northern Territory tourism industry, Finke Desert Race President and life member Antony Yoffa received the coveted award to the cheers of many Finke supporters.

“This award recognises that the Tatts Finke Desert Race is so much more than a sporting event; it is a successful tourism event”, said Mr Yoffa. “This year we had 22,000 paying spectators across the weekend at various events with 15,000 people camped along the track.”

This year’s 40th Tatts Finke Desert Race had a record 875 competitors of whom 716 (82%) came from interstate. These interstate competitors collectively brought with them 5000 support crew and friends who together injected $6M into the local economy. These interstate visitors stay for a combined 31,000 bed nights across the event week.

Often referred to as Australia’s Dakar, the world now takes notice of Australia’s Greatest Desert Race with 31,000 viewing the vision streamed across the weekend.

Mr Yoffa congratulated the 330 volunteers who assisted in the running of the event this year and who undertook a variety of roles in the lead up to and across race weekend.

“These people are critical to the success of our event and are what keeps the event affordable for the 875 competitors.”

Special recognition was given to the Tatts Group who have been naming rights sponsor of the event since 2000 and have committed through to 2017. Mr Yoffa also highlighted the work of the Northern Territory Major Events Company.

“My fellow Finke Desert Race Club committee members – Damien Ryan, Kelsey Branford, Claire Ryan, Kate Ernest and Peter Flink – deserve high praise; they are the ones that put in a great many hours”, said Mr Yoffa. “I am also grateful for the work of our only paid employee Giselle Greenfield.”

This is the fifth Brolga award that ‘the Finke’ has won – adding to success in 2004, 2006, 2007 and 2008. The Tatts Finke Desert Race will now go on to represent the Northern Territory in the Festivals and Events category at the Australian Tourism Awards being held in Melbourne in February 2016.

The 2016 Tatts Finke Desert Race will be held on the Queens Birthday weekend from 10-13th June.

We just saw one of the greatest doing what helped make him great. […]