Shaun Simpson has won his second main event in a week to show blistering form heading into the MXGP season. 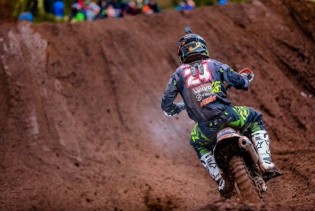 The British rider trumped the field on home soil last weekend winning Hawkstone Park before heading to France to try and do the same. With a consistent few races, Simpson landed a 3-2-2 finish which was enough for him to secure the top step on the podium once more.

My speed was obviously there after practice,” he says. “I had a good start in the first moto and was fourth or fifth but by the time I was up to third it was already too late to catch [Kevin] Strijbos and [Clement] Desalle. I got a better start in the second race and almost had the holeshot but Desalle went wide and slingshot around the first corner. He basically led from start-to-finish, I tried a few moves to pass him but couldn’t make it happen and took a solid second.”

“The Superfinal was quite exciting,” Simpson commented. “I got the holeshot and Desalle was hounding me. The track was quite one-line but not too bad, it was alright for racing. He then over-jumped quite badly and it seems like he’s broken his arm. Townley was pressurising me for a while but then – I think – Jeffrey [Herlings] took him out and I made a mistake on the very last lap going to the finish that let him beat me; I wasn’t too happy with that but to take my second overall win in the MX2 class was good.”

“It was another solid weekend all-round and it was the last International at Valence so it was nice to mark that with the right result.”

Simpson will look to continue his hot run of form as the MXGP season kicks off in Qatar on February 27th.