The Port Augusta Motocross track held Round three of the South Australian Motocross championships held in windy and cold weather conditions which played havoc with the track surface. 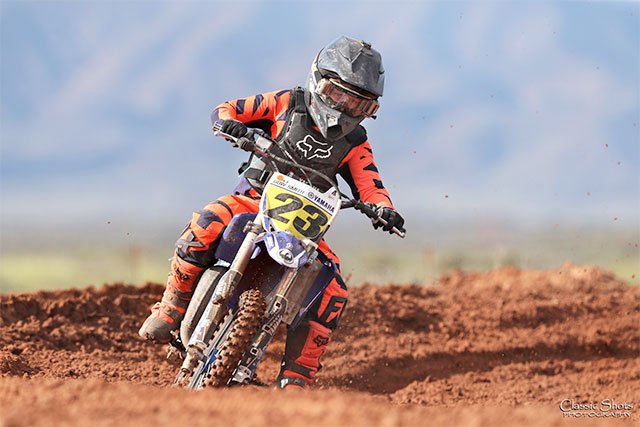 After having a bit of a break since round two it was great to get back to the races and see the SAYJR team in action.

Taj Gow Smith showed up with a certain attitude for the weekend which would prove a winner. Taking the lead early in every moto he started, Taj rode a perfect weekend to sweep all six of his races in convincing fashion across his two classes. Onboard his lethal YZ85, he pushed hard to show the competition he wants this title.

“Today was sick! I finally managed to stay on all day and do what I hoped I could do by winning all my races,” said a very happy Gow Smith.

Alex Larwood came to Port Augusta ready to roll and made short work of his opposition, dominating all three motos showing his riding ability is always growing. He pushed hard all the way to the finish in all races which was very impressive to watch. His YZ85LW showed great speed on the fast track, and combined with a very talented rider it spells trouble for the pack.

“I am really happy with today and how I rode. I felt like my training is really starting to pay off and I feel awesome on the bike,” said young Larwood.

Thomas Larwood wanted to get back to his best form this weekend but had a very rough weekend. Getting bad starts in the first two 125 races, Thomas pushed to climb back to 5th place in both motos. A different strategy for moto three saw seen him start wide to try a sweep around the first turn, instead he got knocked and had a huge first turn crash which would see a foot peg gash his bicep which would later need stitches. He climbed back on his YZ125 and charged to 8th position which was a very gutsy effort. As the 250F race is Sunday on seniors’ day, Thomas’s arm proved too sore to compete.

“I am not very happy with how my weekend turned out. It was just one thing after another and I just couldn’t get a break. My arm was to sore for Sunday, I rode practice and had trouble hanging on so unfortunately I had to pull out of the days racing,” said Thomas.

SAYJR Team Manager Shane Metcalfe was once again very happy with the boys’ efforts on the track.

“Both Alex and Taj showed that all the hard work they have done is coming to life. Thomas had bad luck this weekend, I’m hoping he goes home and works really hard and comes out at Murray Bridge in a few weeks’ time and proves what he can do,” commented Metcalfe.

The next round will be held at Murray Bridge Motocross track on the 13/14th August which will be the final round for the series.

The GOAT Partners with Yamaha for RCU

Hear from the stars following round nine of the 2016 Lucas Oil Pro Motocross Championship. […]