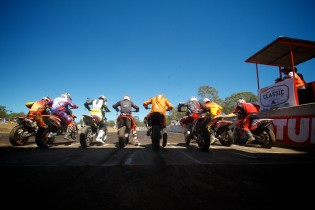 The Australian battled with Superpole winner,  Sammy Halbert over the opening laps of the 21-lap race, before the American Flat-Track Champion bowed out of contention after going down halfway through race.

Bayliss, who recorded the fastest lap of the race with a 21.52 took the chequered flag ahead of 2008 AMA Supermoto Champion Troy Herfoss and 2013 Troy Bayliss Classic winner Michael Kirkness.

“I am absolutely over the moon with the whole event,” Bayliss said.  “When you have a win it is always the icing on the cake.

“The Americana was great I stuffed that up a little but the crowd love it.

“I hope that with the telecast on Speed and SBS and the coverage that will stream on the internet at 4.00pm today will be good for dirt track racing in Australia and also for getting more of the American guys keen to come over here,” Bayliss added

Earlier in the night Halbert took victory in the Americana feature event. The action-packed elimination races saw both Troy Bayliss and Darcy Ward crash out of contention and veteran racer Paul Caslick controversially eliminated for jumping the start.

“This was a really cool event, it was so great to come here and meet a bunch of famous road, speedway and motocross racers,” Halbert said.

“I was happy to be competitive and to be able to battle with Troy for the lead in the Troy Bayliss Cup was special. I took the lead briefly but Troy passed me right back then I was trying to make something happen and slide out in the tight left hand corner.

“The Americana races were really cool on the oval track, it seemed like you could pass more on that than on the TT course. I hope to be back next year I had a really good time here,” Halbert added.

Three-time World Speedway Champion Jason Crump took out the Legends award scoring the most points of the 12 Legends that included Jeff Leisk and Chris Watson in the first four rounds of racing.

To see all the action from the 2014 Motul Pirelli Troy Bayliss Classic download the MotorsportsTV App or click on the Livestream button on Facebook, from 4pm today (Sunday 19th Jan Sydney time Australia)

It takes four to beat the toughest Hare Scramble

In the most extraordinary finish ever seen at the Erzbergrodeo, Alfredo Gómez, Jonny Walker, Graham Jarvis and Andreas Lettenbichler were declared joint winners of the 2015 Red Bull Hare Scramble. […]

Gibbs creeps up on Moss after Murray Bridge win […]