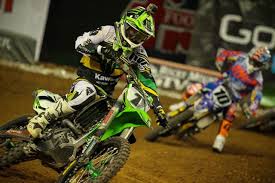 Brayton took over the lead after the second corner, bringing Dungey and Barcia with him. Barcia surged towards the front, passing Dungey for second and then setting his sights on the lead. Barcia briefly passed Brayton, but the Yamaha rider countered back, which allowed Dungey to reclaim second from Barcia. A six-rider battle ensued with Brayton, Dungey, Roczen, Barcia, Villopoto, and Stewart all within just a few seconds of one another.

“Justin was riding a hell of a race,” said Villopoto. “I have to give it to him, he made it tough. I didn’t get the start I wanted because the (starting) gate was slippery, but I just needed to be patient. The Phoenix (track) gets really slick so I had to take my time and make sure my passes stuck.”

Brayton’s runner-up effort tied his career-best finish, which came in Toronto in 2012.

“This feels so good,” Brayton exclaimed. “The new Yamaha is unbelievable. We did our homework this year. It’s been a lot of hard work, but being up [on the podium] pays off. I was trying to pay attention to what was going on behind me but still look ahead. I did all I could to stay up front, but Ryan (Villopoto) got by me.”

“That was a good opportunity to get a win,” said Dungey. “I kept making mistakes. I couldn’t get through the whoops, but all in all it was a good ride. The track was super slippery and it caught us off guard but we still put in on the box.”

With his win, the 35th of his career, Villopoto moves into the 450SX Class points lead. He holds a one-point advantage over Dungey.

MyPlash/Metal Mulisha/Star Racing Yamaha’s Cooper Webb raced to the Nuclear Cowboyz Holeshot Award to start the Western Regional 250SX Class Main Event. Webb held onto the lead for most of the opening lap until Troy Lee Designs/Lucas Oil Honda’s Cole Seely moved into the lead by passing both Webb and Anderson, who started in second. Webb went down moments later and lost several positions.

Seely and Anderson opened a comfortable lead on the field, with Seely extending his advantage over Anderson for most of the 15-lap Main Event. As the leaders approached lappers in the late stages, Anderson reduced his deficit to mere bike lengths. On the final lap, Seely made a slight mistake, which allowed Anderson to challenge for the lead, making the pass with about a half lap remaining.

“I was out for redemption tonight,” said Anderson, who failed to qualify for the Main Event in Phoenix the year prior. “I got a good start on my KTM, like I have been all season. I don’t plan on those last-lap passes, but it was there and I needed to take it. My goal is to keep control of the red number plate (signifying the points leader) so I’ll do whatever it takes to do that. I really want it.”

“I’m bummed,” said Seely. “I’ve been battling stomach issues all week, so was struggling with that. I felt (my stomach) tighten up late in the race and I just made a mistake and Jason got me again.”

GEICO Honda’s Zach Osborne and Monster Energy/Pro Circuit/Kawasaki’s Dean Wilson battled for the third position for the bulk of the Main Event, with Osborne eventually getting the edge to grab his second podium finish of the year.

With Anderson, Seely, and Osborne on the podium, it duplicated the finishing order from last week’s opening race. Anderson’s lead in the championship sits at six points.

Monster Energy Supercross returns to Anaheim, Calif., and Angel Stadium for the third race of the 2014 season. The race will be the 40th Anniversary Celebration of the championship.

The budding 450 Class rivalry between the Red Bull KTM duo of Ryan Dungey and Ken Roczen continued with Dungey gaining the advantage for just the second time this season. […]

The privateer dominated the inaugural Cup which coincided with the Clipsal 500 V8 Supercars. […]