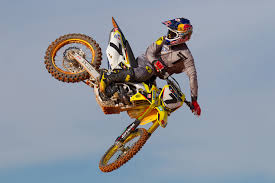 Monster Energy Kawasaki’s Ryan Villopoto, who won the 2011 Monster Energy Cup, raced to the Toyota Holeshot Award in Main Event #1 edging out Red Bull KTM’s Ryan Dungey. Monster Energy Kawasaki’s Jake Weimer and Dean Wilson followed in third and fourth respectively. Red Bull KTM’s Marvin Musquin moved into third place after moving past Wilson and Weimer. On Lap 9, Villopoto rode through the Joker Lane, a rugged sand section that the riders have to pass through at least once in each Main Event, and Dungey moved into the lead.

Heading into the final lap, Dungey failed to ride through the Joker Lane and was assessed a five-position penalty, which gave him sixth place. Villopoto earned the win with Musquin in second and Weimer in third.

“It is definitely a chance (to win the $1 million),” said Villopoto. “I still need to get two more good starts and it’s not going to be easy. On the last lap, I thought he (Dungey) had already rode through the Joke Lane, but, apparently, he did not.”

In Main Event #2, Stewart out-raced Villopoto through the Toyota Holeshot and set the stage for an epic 10-lap race. Dungey moved into the number-three position through turn one but was passed by defending Monster Energy Cup Champion Justin Barcia.

Red Bull KTM’s Ken Roczen passed Dungey on Lap 2 as the battle up front between Stewart and Villopoto ensued. On Laps 5 and 8, the two traded places. Stewart protected his lead and rode to his first-ever Main Event win at the Monster Energy Cup. Villopoto, who did not go through the Joker Lane, crashed on the last lap and was unable to finish the race. Barcia finished second and Dungey finished third.

After finishing fourth in the first two Main Events, Roczen won the Toyota Holeshot in Main Event #3. Stewart made quick work of Dungey for the number-two position. On Lap 4, Stewart passed Roczen for the lead and rode to victory. Dungey finished second and GIECO Honda’s Eli Tomac finished third.

“You don’t understand how special this is for me,” said Stewart. “I am speechless right now; this is a huge win for me and I am pretty damn happy. I know we are making the right steps to get our program to where it needs to be.”

Forkner rocketed to the Toyota Holeshot Award in the opening Main Event. Yamaha’s Casey Keast went through turn one in second place before being passed by KTM’s Mitchell Falk. Forkner won the race with Falk and Yamaha’s Chase Sexton finishing second and third respectively.

“The triple was the toughest part of tonight’s track,” said Forkner. “Once again I had a great start and started to build a gap. This is a really cool race, and it was awesome to race in front of this huge crowd.”

Hampshire won the Toyota Holeshot Award in Main Event #1 of the Amateur All-Stars race with Honda’s Jace Owen on his back wheel through turn one. Honda’s Jordan Smith worked his way around Owen on Lap 2 and set chase to Hampshire. During Smith’s last-lap charge, he crashed with one turn to go and the checkered flag went to Hampshire. Yamaha’s Paul Coates finished second and Yamaha’s Keith Tucker finished third.

Kawasaki’s Darian Sanayei won the Toyota Holeshot Award to start the second Main Event. After starting in second place, Smith moved into the lead on Lap 2 and rode to his first win of the night. Sanayei finished second and Hampshire finished third.

“I am stoked about this race,” said Hampshire. “This race is on national television and to win in front of a huge fan base is a major accomplishment for me.”

The Dirt Shark Biggest Whip contest presented by Nuclear Cowboyz hosted a seven-rider prizefight for the $15,000 purse. After earning his spot in the Main Event through the afternoon qualifying session, Tom Parsons earned the lion’s share of the prize money, followed by Edgar Torronteras and Jarryd McNeil.

Dean Wilson Sidelined for the Season

The Red Bull KTM rider has succumbed to a knee injury he picked up at Anaheim 2. […]

KTM’s hot new Factory Edition 450SX-F and 250SX-F models have proven to be a bit like gold this time round – the kind of precious metals that you are going to have to stake a claim for if you don’t want to miss out. […]

KTM/RPM racing member Cody Webb has taken out the fifth AMA Kenda Tire Tennessee Knockout. The race is quickly becoming renowned as the most difficult and extreme off-road race in America. […]