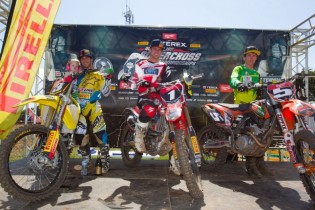 Hill holeshot the 20-lap final and led the race from start to finish, greeting the chequered flag over four seconds ahead of Moss, whileMartin’s third place in yesterday’s Pro Open final was his first ever, professional podium. The DPH Motorsports rider, who has steadily improved throughout the series reaped the rewards by riding a smooth and consistent race.

Campbell Mining Suzuki rider Jake Moss battled a gastro virus throughout Sunday and finished the race fourth while Brett Metcalfe crashed on the opening lap and was forced to the sidelines.

“I am feeling great. it was definitely a pretty good weekend,” Hill said. “I came into this event 10 points down and now I am leaving five points ahead.

“We turned things around in Mt Gambier and I certainly haven’t slacked off, I have been preparing really hard for this round. I really wanted to get out and dominate this weekend.

“I have to go back to the states for some testing but I can’t wait to get back and I think it will be a good battle for the title in Toowoomba,” Hill said.

“I couldn’t have asked for a better weekend,” Faith said “I was so disappointed in myself after Mt Gambier but I think I have redeemed myself now.

“I won’t be doing anything different in terms of preparation for the final round, we will keep to our plan and try and carry this momentum forward.

In the EVE Women’s Australian Supercross Championship, Kawasaki rider Meghan Rutledge dominated the third round proceedings.
The Australian rider won both of Sunday’s races to claim the overall as well as the inaugural championship title ahead of America’s Jessica Patterson and Japan’s Sayaka Kaneshiro.

The final round of Milwaukee presents the Terex Australian Supercross Championship will be held at Toowoomba Showgrounds on Saturday 16th November.

Venues have been announced for the championship following the release of dates at the end of last year. […]

Townley Bows out of MXGP

The Suzuki rider will miss the remainder of the World Championship with internal injuries. […]

Let’s start a fight! Trying to make any kind of list is bound to cause an argument. […]