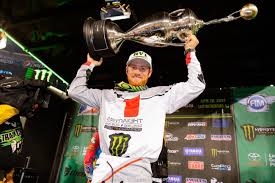 Villopoto captured his fourth Nuclear Cowboyz® Holeshot Award of the season to begin his championship-clinching race in the 450SX Class. As the field finished the opening lap of the race, RCH/Soaring Eagle/Suzuki’s Josh Hill held down the number-two position with Smartop/Motoconcepts Racing’s Mike Alessi in third place.

GEICO Honda’s Eli Tomac Passed Alessi for third and eventually passed Hill for second place and subsequently tied his season-best finish. Hill rounded out the field in third place, marking his best finish of the season.

“It’s been an awesome day here at MetLife Stadium,” said Villopoto. “We had a little bit of rain, but I couldn’t believe how well the track held up. It feels great to lock in my fourth-consecutive championship. It’s been a hard-fought season with a few ups and downs, but it was obviously my most consistent, so I’m glad to be able to close it out on top.”

Yoshimura Suzuki’s James Stewart, who came into tonight’s race in second place, withdrew from the race with what looked like an apparent injury to his left leg.

Coming into tonight’s Eastern Regional 250SX Class Championship, Monster Energy/Pro Circuit/Kawasaki’s Martin Davalos had an eight-point lead but suffered a broken ankle in a practice accident that forced him to miss this race.

“It’s a shame that we had all of our guys get injured on the East Coast,” said team owner Mitch Payton. “We were in a great position to win another title and I feel for Martin right now. He has already had surgery and is going to push to get back as soon as he can. With Blake we didn’t want to risk anything, so we are going to make sure he can ride with the contact lens and hopefully he can come back and get a win in Las Vegas.”

Honda-backed Jimmy Decotis captured his first Nuclear Cowboyz Holeshot Award of the season to start the Eastern Regional 250SX Class Championship with GEICO Honda’s Matt Bisceglia following in second place. On Lap 3, Decotis and Bisceglia came together after the finish line and Decotis crashed, giving the lead to Bisceglia as Bogle took over the number-two position.

Bogle worked his way around Bisceglia on Lap 6 and rode to his second win of the season. Yamaha/Star Racing/Yamalube’s Jeremy Martin made a late-race charge to finish a season-best second place. Vince Friese, who rides for The Factory Metal Works team, also earned a season-best finish with third place.

Bogle now has a 17-point lead heading into Las Vegas’ Sam Boyd Stadium next weekend for the season finale.

“I’m really excited to take home the victory tonight,” said Bogle. “As we were approaching the starting gate the rain picked up, so it got super slick out there as the race went on. I got off to an incredible start, but there were some tough battles out there, and I had to be more cautious because of the rain, so I feel I handled the race well and gave it my best.”

If you have ever wanted to do this ride, here’s a great reason to pull the trigger on it now! […]

KTM Australia’s Off-Road Racing Team Manager Ben Grabham has praised Toby Price’s performance in the 2015 Dakar Rally as a display of consistency and strategic intelligence, the likes of which he’s never before seen from a Dakar rookie. […]