Round four of the 2015 Australian Supercross Championship will deliver a new Jimboomba X track. 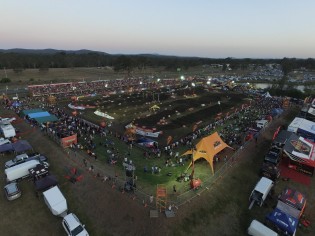 A brand new race track is being constructed at Jimboomba X Stadium as the south-east Queensland venue gets set to host the GoPro round four of the 2015 Australian Supercross Championship presented by Penrite Oils on Saturday, November 21.

After recently staging round two of the Championship, which saw local CDR Yamaha ace Dan Reardon take an enthralling win in the SX1 final after an all-out battle with defending two-time Australian champion, Team Motul Suzuki’s Matt Moss, the Jimboomba track has been totally reworked to provide an all-new USA-style lay-out for round four.

Jimboomba promoter Scott Bannan is taking track design cues from the prestigious AMA Supercross Series in the USA, with the fast approaching J2 event set to feature a number of innovations in the new track lay-out.

“The J2 track design will be totally changed from the J1 lay-out of round two of the Championship last month,” explains Bannan, who has again called in the services of leading supercross track builder, Tom Moss from Tomkaworks.

“This time around we will be featuring an elevated start line, with the start gates up about three metres above the track floor, which will only make the charge to the first turn even more exciting.

“We are also introducing a huge sand section, which will be really long and really deep, and will really sort the men from the boys.”

Between 6,000 and 7,000 tonnes of dirt loam and sand will be utilised in the J2 track construction, with local heavy equipment supplier Finch Earthmoving providing a fleet of 30 tonne excavators, Posi track loaders and semi tippers to assist with the heavy lifting in the track building job.

“Giving the riders and fans alike the best possible race track we can is a vital part of every Supercross event we produce,” says Bannan.

“When the riders are pumped with the track design, it only helps to make the racing more exciting, which is precisely what the fans come to see.

“We’re confident the J2 track design will once again make for a thrilling night’s racing as the best riders in the country continue their battle for the 2015 Australian Supercross Championships.”

Comeback king Reardon, who came out of retirement to return to racing this year, leads the SX1 standings at the halfway point in the six-round Australian Championship chase, seven points ahead of arch rival Moss, with Victorian CDR Yamaha rider, Kade Mosig in third.

Along with the new track lay-out, Bannan explains fans at the J2 event on November 21 will note numerous enhancements to their experience at the event, following the overwhelmingly positive feedback to last month’s round at Jimboomba.

An increased number of restrooms with lighting, baby/mother change stations, grandstand ushers and revised trackside banner positioning are all small but important changes that will be implemented for the November 21 event.

Meanwhile fans will also be able to enjoy the eye popping action of a Best Whip contest during the evening’s program, while a special mechanic’s challenge tyre changing contest will be staged during the afternoon’s pit party.

Tickets to the J2 event are on-sale now via the www.e-ticket.com.au web site.

A spirited effort from CDR Yamaha rider Billy Mackenzie handed the Scot the overall round win in the Monster MX1 class at the 2014 Monster Energy MX Nationals at Coolum, but the day belonged to Team Motul Suzuki Matt Moss who claimed the overall championship win. […]