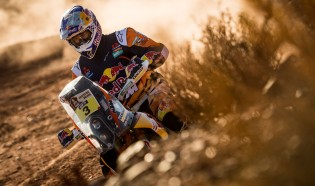 A shortened seventh stage was won by five-time Enduro World Champion Antoine Meo. It was a debut stage victory for the Frenchman who has impressed since making the enduro transition.

Drama unfolded during the stage after Matthias Walkner suffered a horrific crash causing a number of riders to stop and assist until further aid arrived. Overall leader Paulo Goncalves was one of these riders, showing great race spirit, stopping for over 10 minutes to help his fellow rider.

Race officials later deducted the time from Goncalves meaning he holds on to overall victory at the halfway stage. Australia’s Price ended the day in fifth place and now sits three minutes and 12 seconds behind the Portuguese rider.

With the eighth stage being a sole rest day Price was able to reflect on the week that was and look ahead to the remaining stages.

“My goal is to finish the race and get a podium spot,” Price said. “The Australian flags at the finish were great to see. It’s nice to get support when you’re racing so far from home.”

“We had a good first week, no significant mistakes, and our objective was to get to the rest day in a good position.”

“I’m happy with the work we’ve done so far but it’s far from over, a mechanical or a navigational mistake can destroy everything,” Price said.

Brett Metcalfe has almost made a fairytale return to Australian Supercross finishing runner up to Dan Reardon at Wayville Showgrounds. […]

Salvini Leads The Way On Day One In Portugal […]