X-Games gold, silver and bronze medallist Blake “Bilko” Williams will be the man to beat when Speed and Style makes its Australian debut at this weekend’s opening round of the 2013 Terex Australian Supercross Championships. 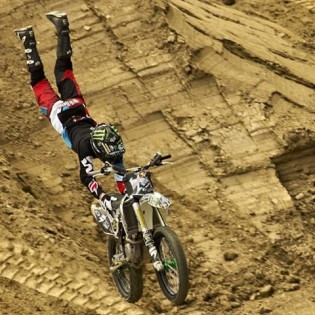 The Victorian, who was awarded a silver medal in Speed and Style at X-Games in August, will jet in for the inaugural running of the popular freestyle motocross adaption.

“I am really excited that Speed and Style is being run with the Australian Supercross Championship,” Williams said. “It is a great fan spectacle and I am looking forward to heading to Darwin. The last time I was there was in 2010.

“I think it will be a huge hit in Australia and I am pumped to be part of its launch there.”

International Entertainment Group (IEG) Managing Director Yarrive Konsky said he was proud to have created such an epic event that encompasses the three popular motorcycle disciplines.

“It’s hard to believe we are going to have this many world renown riders in one place for our first ever motorcycle event that encompasses all disciplines.” Konsky said.

“Blake “Bilko” Williams is huge coup. He is an X-Games gold medallist, Nitro Circus and Crusty Demons performer and a Redbull X-fighters medallist, he truly is one of the worlds greats FMX riders.  We have also confirmed Robbie Adelberg who won the third round of the X-Fighters World Tour earlier this year.  It is  going to be an epic weekend.

“Josh Hill, Gavin Faith and Weston Peick are all coming over from America for Supercross and we have a very strong Superbike field that includes WSBK finishers Glen Allerton, Wayne Maxwell and Jamie Stauffer.

“I am so proud of this epic weekend of extreme motorsport that we have created in Darwin. Over 150 of Australia’s best Superbike and Supercross racers as well as Speed and Style and freestyle motocross,  road bike stunts and 20 of the Top End’s budding young racers who will contest the KTM Mini Masters – it really will move people,” Konsky continued.

Speed and Style, which was first run at X-Games in 2008, sees riders race head-to-head around a purpose built track featuring Supercross style jumps and a number of freestyle ramps.

Riders must include one trick per lap in their run and are awarded points on style (execution and difficulty of tricks) as well as points for speed (the overall race winner to receive bonus points).

It was a strong showing for Dunlop-equipped contenders in Melbourne’s fourth round of the 2016 Australian Supercross Championship on 5 November at Avalon Raceway, Victoria. […]

Suzuki MXGP rider Ben Townley will line up for the opening round despite an early injury scare. […]