Motorex KTM team rider Todd Waters won his second straight round of the Monster Energy MX Nationals at Murray Bridge today, despite a crash which led to him finishing fifth in the first moto. 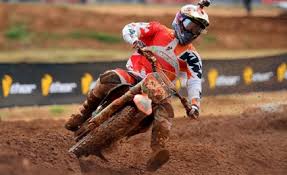 The North Queensland ace not only reiterated his outstanding form from round one, but also showed his ability to fight back from setback as he extended his lead in the MX Nats championship to 19 points.

Motorex KTM Team mate Kirk Gibbs showed his doggedness after a puncture in the opening moto dropped him to outside the top 20. The MX2 rookie regrouped and came out all guns blazing in moto 2, building on a lightning start to claim a brilliant and well-deserved fourth place.

Rob Twyerould – Team Manager “It was a beautiful day today with an awesome crowd. Kirk went down in the first turn then punctured which was very unusual as it’s not a rocky track, but we changed the wheel and he went back out. Todd got to the lead and then washed the front out, but the electric start button twisted under the throttle and he dropped back to sixth trying to get to the button and get started. He came back to third, but stalled the bike in a turn and had the same problem, ending up fifth. He was the fastest guy out there, but he lost track of how much time he had and probably rode harder than he needed to. Still, it was interesting for him to experience that and it made him more determined, which was exactly what he showed in the second moto.

“Kirk was disappointed to puncture in the first race but did fantastically well in race two. He was running third with 10 to go and Bopping got him but he hung with him. He’ll carry this through to future rounds – it was a really good confidence builder for him. He was smooth and in control on a very tough, technical track which really was impressive. I’d also like to say a big thanks to the crew; Kyle, Ryan, Danny and Kevvy for an awesome job in helping everyone to keep their heads high between races.”

Todd Waters #47 “I always enjoy Murray Bridge; every time I’ve raced here I’ve won the overall so it’s been good a good place for me. I was quick in that first race but just made a couple of mistakes. I didn’t get the best start to the first moto but worked my way into the lead by lap two and had started to check out and pull a gap when I washed the front and fell. The starter button got stuck under the throttle and I went back to sixth. I was determined to keep chipping away and came back to third with first and second right ahead, when I snuffed the bike and dropped back to 5th.

I was really disappointed when I came in because I knew the race was mine. I was a little cheesed off but I told myself I need to stop sooking about it and keep a clear mind, which I did and I won the next moto. I’ve learned I can switch it off when I have a bad finish, just put it off and go out there fresh.”

Kirk Gibbs #5 “I’ll look at the positives today, which was my second race. I’m really happy and I’ll keep moving forward with that momentum. I was pretty disappointed after the first, but once I got going I felt like I was riding well, so I knew that as long as I could start well things would turn out okay. I felt like I had good lines and just rode smart, and if I got passed I wouldn’t ride over the top to keep up. I just rode my own race and held my lines and picked up on different ones as they emerged. This race was really good for my confidence. I know the guys have a lot of faith in me and today I showed what I can do if I get a start. The shoulder didn’t bother me at all today, I put in 30 minutes solid on a rough track and there was no arm pump or anything.”

MX2 – In the MX2 class Brock Winston put his KTM into the final podium place while Kale Makeham maintained third in the championship with fourth on the day. Class rookies and Choice Motorsports KTM team mates Dylan Long and Kayne Lamont both gained top-ten finishes with sixth and ninth respectively.

For more information on KTM motorcycles visit www.ktm.com.au  or  www.facebook.com.KTMAustralia

In front of a sell-out crowd of 71,009 at the Georgia Dome in Atlanta on Saturday night for round eight of the 2012 AMA Supercross, Kyle Chisholm ran another consistent race for the DNA Energy Drink / Jeff Ward Racing team finishing 11th in the SX Main. […]

Relive all the action from the final round of the MX Nationals with our exclusive gallery. […]

The KTM rider will be sidelined after doctors detected two hairline fractures in his pelvis. […]