Discount Tire Racing/TwoTwo Motorsports Chad Reed has raced to an emotional victory at the third round of the 2014 AMA Supercross at Anaheim’s Angel Stadium. 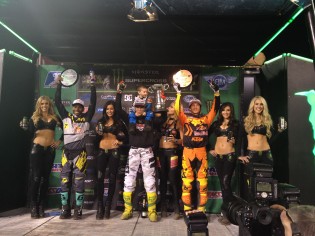 The win, which was Reed’s 42nd in the premier class and his first in 22 starts, sees him match Jeremy McGrath and James Stewart with eight wins at Angel Stadium.

Reed, who was sixth on the opening lap of the race, proved he was back to his best, moving to fourth on Lap 7 of the 20-lap final. The Australian got around Round 1 winner Ken Roczen on Lap 14 and then sailed past career long rival James Stewart to take the race lead with three laps remaining.

“This win was a long-time coming and I worked way too hard to get it. My other race wins came a lot easier,” Reed said.

“Last year was just so gnarly, in the fact that I was just emotional week in, week out. We just made so many changes and when you’re 31 you’re the old guy out there and start to second guess yourself a bit.

“That was when I just knuckled down, made the choices that I felt were right and I’m very, very thankful to Discount Tire for sponsoring the program and allowing me to do what I love to do.

“I am so proud of my team and I really want to thank everyone for sticking with me,” Reed added.

Earlier in the night Reed was honoured in the champions parade to celebrate the 40th anniversary of Supercross.

Youthstream has announced the provisional list of Officially Approved Teams (OAT) and their riders that will take part in the 2016 FIM Motocross World Championship. The final 2016 OAT list will be published by the end of January. […]

Riders Matt Moss and Kale Makeham experienced mixed fortunes at the AUS-X Open both succumbing to injury on the second day. […]

Wilson Coolair Motul Factory Suzuki riders Todd Waters and Luke Wilson have battled through a tough night of racing, at Round 3 of the 2016 Australian Supercross Championship at Wayville, South Australia. Press Release With […]