Cooper Pozniak will enter the last round of the Australian Supercross Championship as hot favourite for the Junior Lites category. 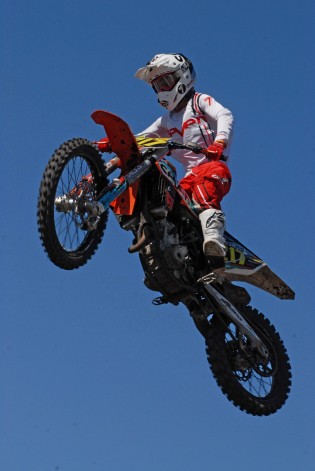 It has been a phenomenal season for the 16 year old winning three of the four rounds held so far. It was only a broken chain at Jimboomba in round four that prevented the young rider from a potential series clean sweep.  Heading into this weekend of racing Wozniak holds a 13 point buffer over second placed KTM teammate Jake McGlashan.

“The points are close, so the pressure is going to be on at the final round this weekend,” admits Pozniak.

“But my plan will be to keep doing just what I have been through the previous rounds and come away with the Australian Championship that would be awesome!”

Pozniak rides with the support of Newcastle KTM and is well aware of the talent that has emerged from the region before him including household names like Chad Reed and Craig Anderson. Like these two legends Wozniak would love to embark on an international career.

“That’s the goal, for sure,” explains Pozniak, who last year recovered from two broken legs to capture his first Australian Junior Motocross Championship.

“I raced the World Junior Motocross Championships in Spain earlier this year and finished 16th overall and that event really helped to open my eyes about racing overseas, and that’s definitely what I want to do in the future.

“I turn 17 next year and will go up to the Development class here in Australia, so I’m excited to see how I go and what kind of ride I can get and then hopefully take the next step in my career and make a plan to race overseas.

“I would really like to be able to race in America in the future, that’s my ambition.”

In the mean time Wozniak has his eyes set on Saturday night as he aims to add another Australian title to his fast filling resume.

Tickets to the December 5 event at Knights Stadium are available at: www.ticketebo.com.au/supercrossmelbourne

Reigning two time champion Matt Moss has picked up exactly where he left off in 2014, trumping the field to show he is once again the top contender in the SX1 class. […]

All the action from round 14 of the AMA Monster Energy Supercross series.