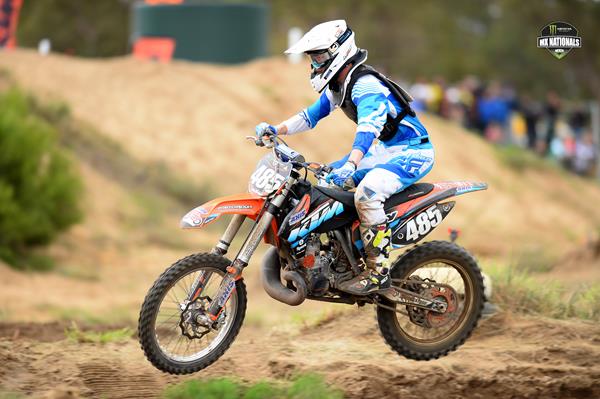 Young 17 year-old privateer Caleb Ward has continued his great form from round four of the series, to take the round win in the Motul MX2 class at the 2014 Monster Energy MX Nationals in Western Australia. The KTM supported rider managed two race wins and a third placing from his three races, to take a comprehensive victory on the day and move into seventh place in the outright championship.

Round four winner and SD3 Husqvarna rider Luke Arbon continues to build in confidence – his fourth, fifth and first place finishes taking him to second outright on the day. Josh Cachia (Penrite Honda Racing) rounded out the top three (eighth, fourth and second), while Jay Wilson (Serco Yamaha) finished the round in fourth and Hamish Harwood (CMR Redbull KTM) in fifth.

Ward took the holeshot in the opening MX2 moto of the day, and despite pressure throughout the race from Harwood initially, and then Luke Clout (Serco Yamaha), he held on for the win. Reigning red-plate holder Clout got off to a good start – moving into third place after the first corner and moving into second place past Harwood towards the end of the second lap. While Clout pressed Ward throughout the second half of the moto, he had to settle for second place in the race, and Harwood rode well to finish in third. It was the other title contenders who really raised eyebrows in the opening race. Brendan Harrison (Instant Security KTM) could only manage 14th place overall, while kiwi Kayne Lamont (Husqvarna Red Bull WIL Sport NZ Racing) struggled multiple times throughout the race and had to settle with an 18th placed finish.

In the second MX2 moto Ward again took the holeshot, but his lead didn’t last too long with Wilson moving to the front of the field at the second turn. He was followed by Ward, Kale Makeham (Tunetech Reacing KTM), Clout and Cachia with Lamont back in 10th, Harrison in 14th and Harwood back in 16th. On the second lap Clout took a nasty tumble and by the time he could recover, he joined the field back in 24th. While he managed to finish the race in 18th, it might just be looked back on as a key moment in the MX2 championship race.

On the fourth lap Ward fought back into a lead which he never relinquished, giving him the perfect result from the opening two races – Wilson finished in third and Makeham crossed the line in third. Cachia and Luke Arbon rounded out the top-five, with Harrison (eighth) and Harwood (11th) fighting hard to earn important overall points. The nightmare round continued for Lamont who rolled across the finishing line in 23rd nursing a severely injured shoulder.

In the final moto of the day, Arbon claimed the holeshot and kept the lead for the entire race to claim a solid moto win. Wilson jumped straight into second spot and looked like he would comfortably hold onto it before he came unstuck on the second last lap – forcing him back into eighth. That mishap allowed a plucky Cachia to take second spot in the race, and round surprise packet Ward to claim another podium race finish. Geran Stapleton (Raceline Pirelli Suzuki) and Husqvarna supported Nathan Crawford finished in fifth and sixth respectively.

In the overall championship standings Clout has had his lead whittled down to just 10 points, with Harwood, Harrison and Arbon all within striking distance of the series leader.

The series now takes a five-week break before round six, which takes place on 29 June in Swan Hill, Victoria.

With the Motul MX Nationals proving to be strong program for sponsors, GAS Imports has today confirmed its increased support for the series this year, with Akrapovic named as the official exhaust once again in 2016. […]

Class wins for Green and Roberts at Yamaha AORC round six

Active8 Yamaha’s Josh Green and AJ Roberts came out on top of their respective classes at today’s round six of the Yamaha Australian Off-Road Championship (AORC), held at Corner Inlet, Victoria. […]

The YJR NSW rider made a triumphant return to racing at round two of the NSW State Motocross Championships. […]