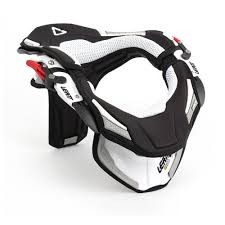 There are a lot of conflicting views on the Leatt brace; here’s mine. To those who say there isn’t any data to prove that the Leatt is completely safe I say, where is the evidence that it isn’t? There is a heap of data to support the function of the Leatt but I’ve seen none that even vaguely supports the fact that the Leatt is anything but a critical safety device. There’s anecdotal evidence but no solid data. You can’t make decisions like this based solely on anecdotal evidence.

The GPS Club 3 is Leatt’s latest version of the brace and it’s been improved in a number of ways over the previous models. On a practical level, it’s more adjustable and thankfully the hinges have been improved. Also the thoracic strut (runs down your back) has been reshaped and widened. This is the main focus of the controversy around the Leatt. The question of whether that strut actually causes injury has been thrown out there by riders such as Chad Reed and Leatt has obviously taken note of those questions and improved the strut design.

I’ve had a crash big enough to damage a Leatt. That’s not easy to do and I don’t remember much of it, to be honest. Where the Leatt stopped the momentum of my head may well have been just short of where I would end up with a serious neck injury. That’s what it was designed for and, in my mind and through the evidence in front of me, it did its job.

It’s not a perfect device. It’s difficult to look up high when you come to a hill, for example, but the Leatt is a part of my gear bag as much as my boots are. It’s just part of riding now and the countless number of copies and brands jumping on the neckbrace bandwagon is evidence that the concept is solid and important.

What’s new in the range from USWE

30/11/2016 Ashley Diterlizzi GEAR CHECK, NEWS, TECH Comments Off on What’s new in the range from USWE

Domino makes a premium grip and this new addition is no exception. […]