We recently had the chance to ride the KTM 790 Adventure and Adventure R at the media launch in Morocco – which is where the Rally team tests. We’d been busting to ride this bike since the earliest sneaky shots came out a couple of years ago and it didn’t not disappoint. There will be a full test feature with additional info in issue 229 of DIRT ACTION, but until that returns from the printer here is the abridged version for a quick overview.

The electronics are top-shelf and beyond what’s on offer on the 1090. Beginning with the ride modes you’ll find Street, Rain and Offroad and the new Rally mode on offer (Rally is an option on the Adventure model but standard on the R). An explanation of modes in 2019 is somewhat redundant and fairly self-explanatory but of interest here is the Rally mode which is where I did most of my riding. Via Rally mode the rider can, in real-time, adjust the level of traction control from a setting of one to eight to suit changing conditions. As we went from road to hard pack to ‘fesh-fesh’ (kind of like bulldust) and to deep sand and back again in all manner of order, it was simple to adjust the level of traction control needed with the control panel on the left. 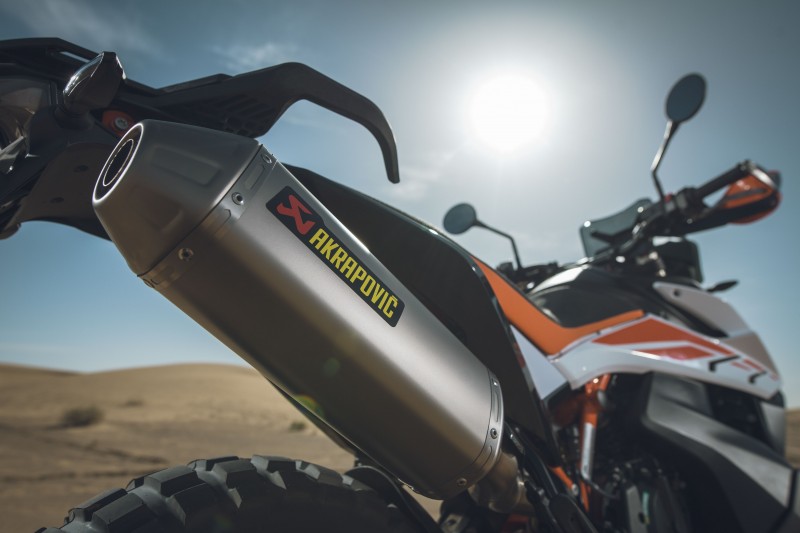 The engine is the same that’s found in the 790 Duke road bike but with a slightly different torque curve that kicks in earlier and stays on through the mid-range to help handle offroad situations where bursts of power are not needed and instead consistent traction is the key.

The 790’s engine is nice but there are a lot of nice engines out there. The V-Stroms have nice engines, as does the Africa Twin and on and on it goes. But it’s the physical design of this engine – not so much the output that deserves applause. The 800cc parallel twin boasts the smallest dimensions on the market which allows for lower seat heights and greater ground clearance. I’ve included in this feature an explanation by, Adriaan Sinke, Senior Product Manager on the 790 program on just how and why this engine came to be the basis for the bike so check that out for the full inside view.

We ran bikes with the optional Quickshift which allows clutchless shifting up and down and even allows shifting without interfering with the cruise control. Compared to BMW’s offering it felt a bit clunky and slow to respond internally and yet extremely light to the touch at the lever. I never hit a false change though and overall I’d probably run it on a bike I owned for the simple fact that it takes one active brain cell less to ride and I have so few to work with. 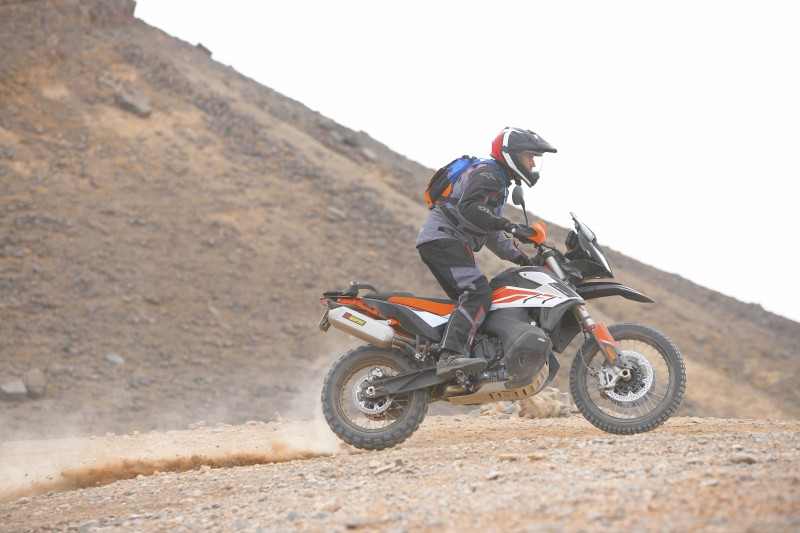 BEST BOING FOR THE BUCK

The star of the show here is without a doubt the handling package. There was a time when I knew the Africa Twin had the best offroad capable set-up for adventure but this is no longer the case, the 790 is another level. It’s not just a numbers game but the numbers look good with 263mm of ground clearance and 240mm of travel both front and rear and the use of Xplor fork and shock as found on the EXC range instead of the more road oriented kit on the 1090 and 1290.

Compression and rebound are manually adjustable as per the Xlpor on any other model and in a head-to-head comparison there isn’t another bike on the market right now that can out-perform the 790 offroad. The suspension is of course aided by a low centre of gravity thanks large to the small engine and low fuel carriage and a chassis that offers a good compromise between durability and flex. It’s a little too hyperbolic to say you can ride it like a dirtbike, but it’s as close as an adventure bike has ever got and it’s not that far off the 690. You can throw it around and it does feel nimble but it’s also stable at speed, something we were able to gauge running full-noise in the middle of the Sahara with nothing impeding your progress for as far as you can see. The Xplor soaked up the smaller stuff brilliantly, which will constitute 95 per cent of most bike’s day-to-day, but it can be jumped and dropped-off and belted into a wide range of obstacles at speed and not shy away, aided in part by a small rod-style non-adjustable steering damper. 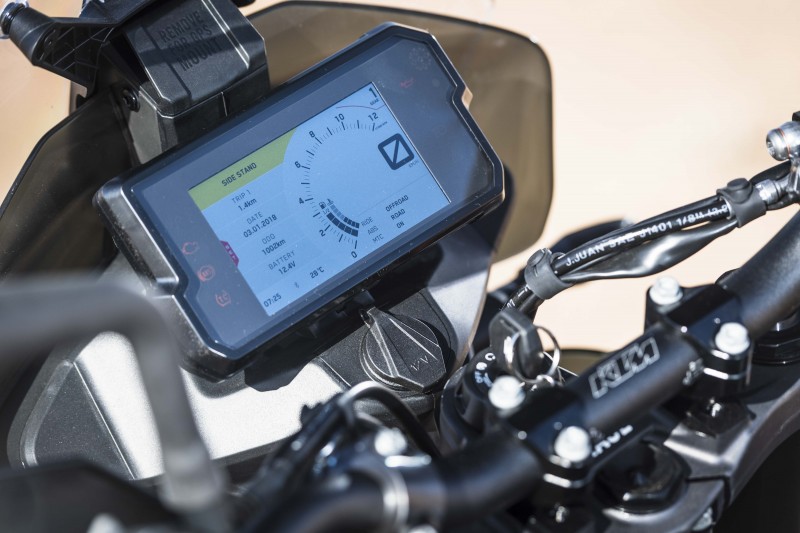 THE BAR HAS BEEN RESET

What you are buying here is confidence when things get tricky, you get a bike with every practical performance piece on offer from the competition except electronic suspension adjustment, but on the flip-side you get better stock suspension than anyone else offers. You get a bike that will, to borrow an oft-used phrase, make you a better rider because it’s simply easier to ride but didn’t sacrifice performance to get there.

KTM has redefined what an adventure can be and should be for anyone looking to spend extended periods off-road or to push their own capabilities. We’ll watch with interest as the 790 Adventure R is tested by riders the world over and if the durability proves solid then the competition will have to make a mighty shift to take it on head-to-head.

DA issue 229 will have a heap more info and tech talk so keep an eye out for the fresh issue coming soon! 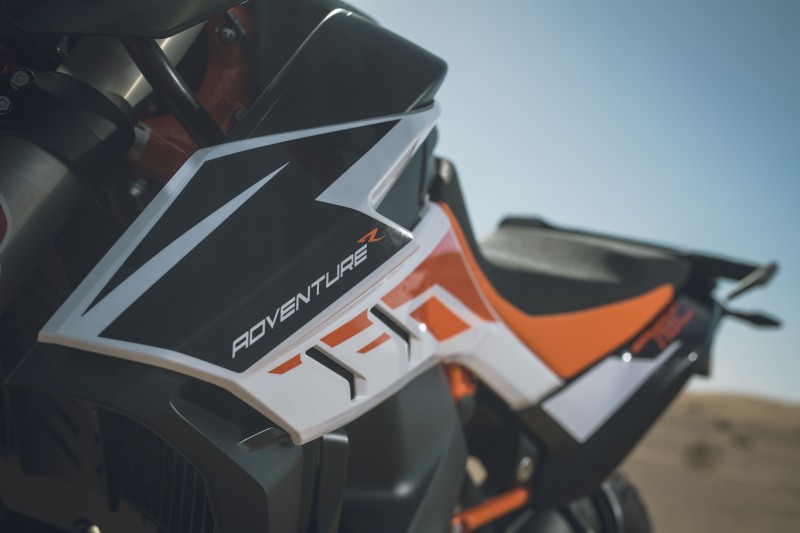 Kirkland and Wills Primed for Penultimate Round

The Raceline Pirelli KTM riders are looking to gain maximum points as the Motul MX Nationals reaches the pointy end of the season. […]

The sun was shining also today in Kegums to host the final races of the Latvian Grand Prix and the technical hard sand track of Zelta Zirgs saw Antonio Cairoli and Jeffrey Herlings obtaining another overall victory. […]

Metcalfe Scores Third at Round Two of the Canadian Nationals