The KX Junior Squad is back with more skill and determination than ever following a triumphant year of racing and development in 2015. 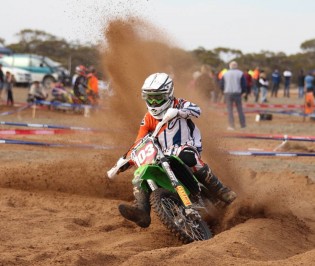 Mitch and Josh Brierley, Grace Rowe, Max Whale and Joshua Livsey will be leading by example on their Kawasaki KX250F motorcycles while Brad West will continue to dominate aboard his Kawasaki KX85.

In its third successful year, the KX Junior Squad program will continue to deliver support to these top level athletes, with the goal of encouraging the progression of their racing careers.

National Sales and Marketing Manager of Kawasaki Motors Australia, Robert Walker, said, “The KX Junior Squad program has been a glowing success since it kicked off three years ago. The squad members have thrived in their respective disciplines and it has been a touching experience to watch them flourish within the challenging off-road, dirt track and motocross racing environments.”

“The achievements of the squad members in 2015 reinforce the purpose of the KX Junior Squad program which is to enable these riders and to help them realise their abilities. We are extremely proud of the Kawasaki KX Junior Squad program and the role it plays in sustaining the future and growth of Australian motorcycle racing,” Robert commented.

“The KX250F is an absolute rocket, you don’t need to touch anything to do with the engine and it is quick enough to keep up the pointy end of the field!” commented Josh.

With the additional support of BikeBiz Kawasaki, this year Joshua aims to back up his championship titles by taking out his classes in the Australian Off-Road Championship, the NSW Enduro Championship and the Hattah Desert Race.

Max Whale roared through the 2015 track racing scene, picking up two Australian titles on the way aboard his Kawasaki motorcycles.

The 13 year old said, “I’m very excited to be on the KX Junior Squad again for 2016 and aim to win every race I compete in. It’s been a confidence booster for me, being a part of a factory backed team and it showed in my results in 2015. The KX250F is the best bike by far that I’ve ever ridden. I love everything about the bike, the bars, levers, grips, seat position and the strength of the motor, the whole package is awesome.”

The reigning champion started 2016 off with a second place overall in his class at the recent Troy Bayliss Classic, despite running the quickest junior lap times. “I won this race last year and was looking forward to winning again this year unfortunately the weather put a stop to that with no final and the meeting was declared with positions being awarded on heat results,” Max said. Bayside Kawasaki will be assisting Max with his race machine in 2015.

Despite her gentle appearance, Grace Rowe is as fierce as they get when she is in contention for a race win aboard her Kawasaki KX250F. Grace finished last year’s seasons with two podium positions in the NSW Junior Girls Motocross Championship.

“To be a part of the KX Junior Squad is literally a dream come true. Everyone at Kawasaki is so encouraging and supportive. It’s so great to be on a team of riders, and to be able to share the journey with friends.”

“The KX Junior Squad has helped me so much in my racing in the 2 years I’ve been on the team. One of my favourite parts is the feeling of being a junior female on such an amazing team, and having the strength of the team behind me.”

Grace has partnered with Black Top and Dust to compete aboard her KX250F in 2016.

Brad West is the KX Junior Squad’s youngest member but what he lacks in age he makes up for in sheer courage and determination aboard his KX85. Max’s racing endeavours will see him compete across Australia as well as within the U.S. this year.

“It’s an honour to be in the KX Junior Squad. I love the KX range and the people behind it and love the support that Kawasaki give me. The KX Junior Squad has been a huge success to my racing in Australia and the U.S. It’s by far the best Junior program around.”

“My 2015 Kawasaki is great, the bike feels great and handles great, the brakes are really good and the power of the bike is awesome,” Brad commented.

In 2016, Mitch Brierley takes the leap from his J2 Australian Off Road Championship winning KX85II, to the more powerful KX250F with the help of BikeBiz Kawasaki.

“It’s great to be a part of the KX Junior Squad for another year. The squad has helped heaps by turning over the bikes every year, keeping them fresh and without problems, giving us lots of great opportunities. The KX250F is great and it runs awesome and I am aiming to podium at the NSW and Australian Off-Road Championship and the Hattah Desert Race.”

In 2015, Joshua Livsey campaigned his KX85 throughout the QLD Junior Motocross circuit and in 2016 he is eager to step up to the KX250F. “It’s fantastic to be chosen again this year. Team green is the best machine!” said Joshua. Josh has teamed up with Team Moto Kawasaki Marooka this year.