Kaliub Russell has become the first rider in the history of off-road racing to claim the GNCC and National Enduro Championships in the same season. 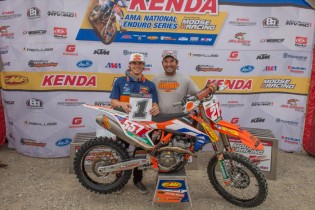 The factory FMF KTM rider needed only finish on the podium in round nine to secure the second of his titles – the Kenda AMA National Enduro Championship. Wrapping up the series with a round to spare is a huge achievement for Russell who has had a significant few weeks of racing.

Only two weeks ago the KTM rider was over in Slovakia competing in the 90th ISDE before returning last week to take out the GNCC championship. The double has never been achieved before so Russell entered the weekend with the knowledge that a strong rider could see him make history.

The day had its ups and downs with the champion colliding with a corner in test two jarring his knee. “That incident was really painful but I was able to recover and manage the pain throughout the rest of the race,” Russell said.

Recovering from the incident, Russell managed to ride his KTM into third position, scoring enough points to make his championship lead uncatchable.

“It feels great to come here and get a good result. A few weeks ago, when I hurt my knee, I wasn’t sure what I would be able to do with the two championships I had on the line. I am so thankful I was able to ride through this injury and win these championships. I had a great season and I am very grateful to my team for their support,” Russell stated.

Another piece of history was made by Russell as he and his father Jeff became the first father son duo to win championships in the same series. Undoubtedly, the result has capped off a fantastic year for the KTM rider and even better last few weeks.

Following the FIM’s recent decision to crown Australia 2015 World champions, team France has decided they will not compete in next year’s competition. […]