Red Bull KTM’s Jonny Walker has topped the field at round three of the series in Argentina. 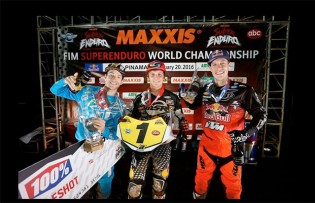 Walker dominated the event claiming two wins and a second place to stand atop the overall podium. The victory also handed Walker the overall championship lead moving ahead of Cody Webb.

“It’s almost a prefect night,” told Walker. “Two races wins and a second place result for the overall victory is great. But to then take control of the championship lead by 11 points is just incredible.”

Colton Hakker was able to finish in second place splitting Walker and Webb with a 2-2-3 finish. Webb missed out on valuable championship points now trailing Walker by 11 points with three rounds remaining.

“I’m a little bummed to be honest,” told Webb. “I just didn’t have a good night. I made some silly mistakes, had a couple of bad starts and one big crash in race three. Thankfully I regrouped to win the final race and salvage third overall. It’s tough to lose control of the point’s race but I’m not going to dwell on that too much. I’ll be on the attack again for Brazil.”

Round four of the FIM SuperEnduro World Championship will take place in Brazil on February 27th.

I’d never heard of HZ goggles when these sweet new things from HZ showed up. […]

Lawson Bopping is the new recruit for the CDR Rockstar Yamaha Team in 2012. […]