Hear from the stars following the final round of Lucas Oil Pro Motocross. 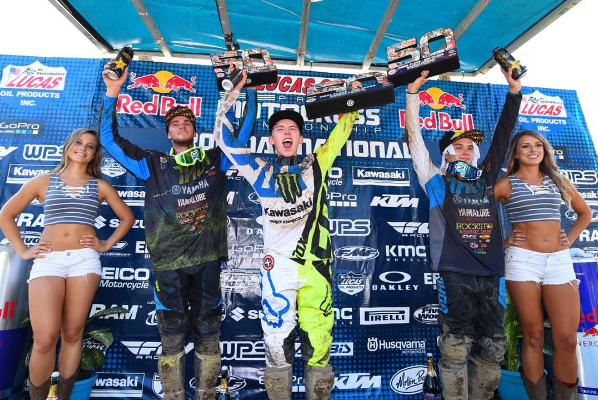 Ken Roczen: (1st in 450MX) “Yeah, we really didn’t know what was going to happen with the weather. It seems like yesterday or the day before it was going to be fine, and then all the sudden it changed and it was supposed to pour all day. There ended up being no clouds in the sky, and it ended up being a beautiful day. Obviously it was a little sloppy in the morning, but it changed. In the first moto, it was still a little rough in some spots with the mud and everything, but I knew for the second moto it was going to be a lot better. I grabbed awesome starts. I holeshotted the first one, and in the second one, I was top three. I just put in a good charge in the second one and went for another win. I said it last weekend; we want to do another 1-1 and finish the season off, not just slack around. That’s exactly what we did, and I can’t be any happier. It’s good now to take some time off and enjoy everything. As good as the season was, we’ll just let the whole thing settle in and enjoy.

Justin Barcia: (2nd in 450MX) “Today was good. I’m happy with it. Practice went good, qualified first. Actually, I thought I wasn’t because I actually jumped on a red flag and it took away my fast time but luckily my second fast time was like exactly the same, so I got lucky there. And still qualified first. I felt like I was the closest I was to Kenny [Roczen] in the first moto so I probably like I kept him honest for a little bit. I wish I could have kept it longer. (laughs) He’s on a roll right now obviously. Dude’s riding super good. It’s frustrating. (laughs) Second moto was not better. I made a bike change and I didn’t feel as comfortable. You just never know. You kind of go in blind a little bit. I was like, I think this is going to be the right direction but the track changed so much. I kind of miscalculated a little bit I guess. It was a little struggle and then I went down. Eli [Tomac] was on me for a while. I pulled away a little bit and just finished out the moto. So it was good. The track turned out to be awesome. I was pretty happy with it. It was rough and rutty, and everything you could ask for in a motocross race.”

Eli Tomac: (3rd in 450MX) “I was a little ways back on the start but made my way up to third pretty quickly. After I made the pass, I made a mistake and had to start all over again. Luckily I was able to reel him in and make the pass, but the track was really tough. The lines and the ruts were changing every lap, they were really deep and it was hard just keeping your feet on the pegs. Most of the problems from the day stem from my starts, otherwise I feel I rode how I should have.”

Jason Anderson: (5th in 450MX) “I want to be up with those front guys. This was a tough race to come back on. This was probably the roughest track I’ve ever ridden. I could have been better if I would have raced all season, but I still feel like I did pretty well considering I was on the couch for the majority of the summer. I’m going back to California and will focus on getting ready for Des Nations.”

Austin Forkner: (1st in 250MX) “Today was a really good day. Practice started off really muddy, with very deep ruts, but I ended up qualifying well. In the first moto I earned the holeshot and told myself not to look back no matter what. I finally did about 20 minutes in and there was no one behind me at all. My mechanic kept me updated with everything throughout the end of the moto and I was able to cruise home for the win. In the second moto I earned the holeshot again, settled in and kept it out front for at least 20 minutes. After the finish line I jumped wrong and landed in a really soft hole, cross rutted and tucked the front. Luckily I didn’t stall the bike, but my bars were bent and I had a bunch of sweat in my eyes from going down. Another rider got by me so I slipped to third, but that, with my Moto 1 win, earned first overall, the first one of my career. I’m fourth in points, two moto wins and five podiums in my rookie season, I’m really happy and can’t wait for next year.”

Aaron Plessinger: (2nd in 250MX) “In moto one I didn’t get off to the greatest start and I struggled from lap one on. I didn’t get a flow. I was not smooth in my corners or anywhere. I came up to eighth and I was pretty happy with what I was riding like. I came into moto two with nothing to lose. I just put my head down and got the jump on the gate. I never got a MX holeshot before so it was pretty cool. (laughs) It was sweet leading that first lap. I put my head down and charged really hard. I made a mistake before the finish line and Austin [Forkner] got around me and we had an awesome battle. He tipped over, I took the lead and I think he [Austin] was battling with Cooper [Webb] for a while. I just rode my own race and celebrated on the last lap.”

Cooper Webb: (3rd in 250MX) “Moto one was looking good. I got a good start and then after the big uphill double I went inside and got stuck in a rut. I fell over, couldn’t get my leg out and went back pretty far. That was unfortunate. I made some passes and got my way up to fourth and trying to get around Alex [Martin] I crashed again. I ended up fifth in that first one. In the second moto I got another pretty good start. A.P. [Aaron Plessinger] and Austin [Forkner] were right there and I think it was going to be another pretty epic battle, but I ended up going down. It was a little bit of an up and down day. It’s good to be on the podium, but a little bummed to be on the ground so much.”

Adam Cianciarulo: (5th in 250MX) “It was another good day. I had a good bit of confidence from the last round and felt strong. I’ve had good speed and my body is catching up and I’m getting back to where I belong. My goal for the year was to get through all the motos and I did that, now I’m working towards keeping my speed at every round. I’ve got what it takes to win I just need it every weekend.”

Arnaud Tonus: (6th in 250MX) “This was my best race of the year,” said Tonus. “My speed and the way I rode, I’m really happy with today. At the end of the first moto I felt great and made a late moto pass. In the second moto unfortunately I went down early on and started basically last. It was a hard ride but I pushed really hard and crossed the line in ninth, which I’m happy with. The shoulder injury from Monster Energy Supercross held me back a bit early on but no excuses and I ended the season well.”

Mitchell Oldenburg: (8th in 250MX) “It’s been a long motocross season and I’m really happy to bring the team another top 10 finish. Obviously I would have loved for the race to have gone better in Moto 2, but we came out healthy and have all 12 rounds under out belt.”

Justin Hill: (10th in 250MX) “I’ve really felt good in the second half of the moto, but still have needed to find that speed in the opening laps. I was able to do a bit better in Moto 2, which we’ll claim as a positive way to end an up and down season.”

RJ Hampshire: (11th in 250MX) “That was my first LCQ, I was super nervous! First moto had a terrible start and worked up to 10th but crashed twice thelast two laps. Second moto I got a better start but crashed hard the first lap, worked my way all the way up to 10th. Happy the year is over and I‘m healthy. Looking forward to a productive offseason.”

Martin Davalos: (15th in 250MX) “The track was gnarly. I crashed five times in the first moto and ran out of tear offs. The second moto was better and I had a better start. My shoulder was just bothering me. I’m finished healthy, and I finished the entire outdoor season which makes me happy.”

Jordon Smith: (17th in 250MX) “This weekend was a tough weekend. The track was tough all day starting with the first practice. It was really just limiting the mistakes. The first moto I got off to a mediocre start, moved my way to ninth and just tried to stay consistent and make as few mistakes as I could. Second moto we had another electrical issue on the line, and on the second lap I had to stop intothe mechanic’s area for the mechanics to fix it. By then I was already almost a lap down. It was another rough day to finish the season. I have to give it up to the entire GEICO Honda crew. They worked hard all year and I want to thank them for that.”