The Dakar Rally 2016 marks a special milestone for the newly formed Rockstar Energy Husqvarna Factory Racing Team who contest what is effectively the most important and gruelling offroad competitions in the annual motorsports calendar. 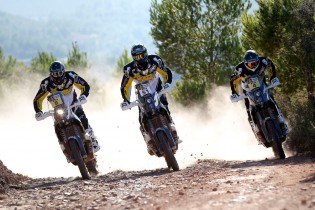 Riding the Husqvarna FR 450 Rally machine in the factory team colours will be Dakar veterans Pablo Quintanilla of Chile and Portugal’s Ruben Faria, with Pela Renet contesting his first edition.

Quintanilla, at Christmas 2015 named “Best Rider of the Year” by the specialist media in Chile will start with the #4 bike after an excellent ride in the 2015 edition that saw him narrowly miss the podium.

In fact, in the absence of the #1 plate of the now retired Marc Coma, who won his fifth Dakar Rally last January, Quintanilla will be the third rider out. Quintanilla is contesting his fourth Dakar Rally and he believes the real test of endurance will come when the competition enters Bolivia.

“I am very calm and happy with the Husqvarna factory bike because it’s reliable, very fast and very tough for this sport.” Quintanilla commented. “This time we are not riding in Chile so there is no open desert, but the difficult navigation in Fiambalá, Belén and San Juan, plus the altitude and rainfall in Bolivia will make it difficult for everybody.”

Starting with #8 is Faria, a Dakar regular since 2006, and who delivered his best performance in 2013 when he finished second overall. Faria has had three top ten finishes in the Dakar and is very capable of a strong finish.

As the most Dakar-experienced of the Husqvarna trio, Faria said the most important aspects for him are the physical effort involved, and also the skill in navigation. He is also very pleased to be riding the Husqvarna machine.

“The Husky is amazing!” Faria exclaimed. “The engineering team has done a fantastic job on the chassis and other details.

“This bike is the result of unbelievable teamwork and I am proud to be part of that. Training and riding with my teammates is also fantastic because we develop the bike together and each one of us gives important feedback to the team after riding in the same conditions.”

Newcomer to the rally team but not to the Husqvarna brand is French rider Pela Renet, who comes with a wealth of experience in MX and enduro racing and is a proven E2 World Champion.

A shoulder injury mid season denied him the E2 title in 2015, but Renet is fit and well and first rode the FR 450 Rally in the Morocco Rally in October. He says he has always had a goal of competing in the Dakar Rally, and when the opportunity came up to ride for Husqvarna, it was an offer he couldn’t refuse.

“For the last 2-3 years I’ve been thinking about finishing off my racing career in rally raid.” Renet explained. “After my really good season in 2014 I began to discuss with Husqvarna if they had any plans to go into rally and now I’m here!

“My preparation was not the best one because of my injuries but I’ve worked a lot over the last weeks to be ready for January 2. The preparation with the other riders was very good.

“The atmosphere is great, the team is really professional and my bike is amazing. I’m simply in the best position to learn and to progress in rally raid.”

Faria also had some words of advice for the team’s rookie Renet, saying, “Pela Renet is a very good and fast rider, but in the Dakar you need experience. I think I can help him to start to get that experience.

“My advice to him is to try to improve his riding and his navigation day by day, but always stay in his comfort zone. If he is able to do that then he will get a good final result.”

In addition to the three official factory riders, Husqvarna are also supporting young Italian talent Jacopo Cerutti, who won his place in the Dakar Rally after an excellent sixth place result in the 2015 Sardegna Rally Race, one of the official Dakar Challenge events.

Cerutti, who also comes into rally raid from enduro sport, will ride under the banner of the HT Husqvarna Team. He has a modest goal to finish the rally and, as he says ‘not in the last place’.

The 2016 edition of the Dakar Rally begins with the prologue in Buenos Aires on January 2, 2016.

Riders travel west through Argentina then follow the spine of the Andes mountains north into Bolivia. They then travel directly south crisscrossing the mountains until they reach San Juan in Argentina, where they turn east to eventually finish in Rosario.

Over the thirteen stages they will travel in excess of 9,000 km and be confronted with very difficult conditions that will test their navigation skills, as well as their riding.

They will also need absolute peak physical fitness and enormous mental strength. The one rest day is on January 10 in Salta. Because of anticipated disruptive conditions caused by the El Niño weather phenomenon, Chile and Peru were forced to withdraw from the program for this edition.