Wade Hunter led home a fast flowing Serco Yamaha freight train in the 15 lap SX2 final at round three of the Australian Supercross Championships, held at the Wayville Showgrounds in Adelaide. 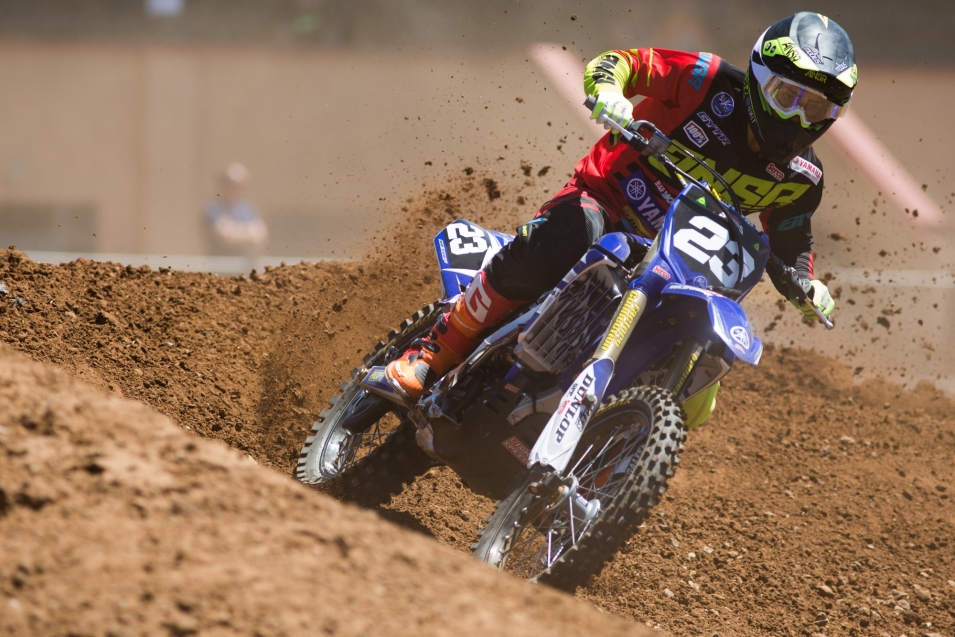 For Hunter it was another trip to the podium after a strong performance in the SX2 main event. Hunter was off to a strong start but was shuffled back a little in the commotion of the early laps. He regained his composure and passed his way back into third place behind race winner, Hayden Mellross and US rider, Gavin Faith.

“Tonight was a good main event after a few issues during the afternoon,” Hunter said. “I had my share of crashes and near misses during qualifying so it was good to be able to turn it around in the main event and finish on the podium.

“Both Gavin and Hayden were better than me tonight and they rode really well so congratulations to them but my goal is to win one of these things before the year is out,” Hunter ends.

It was a welcome return to form for Wilson Todd after an injury riddled start to the supercross season. While still not 100%, Todd showed plenty of good signs on his way to a fourth place finish and will only improve as his fitness and race craft return.

Todd wasn’t handed his fourth place finish and had to work for it and he moved his way forward. He still isn’t satisfied with his result, but come away knowing that things are headed in the right direction and now sits in ninth place after only doing two of the three rounds so far.

“Last round was an eighth, this week it’s a fourth and a lot closer to the front so it’s important to keep moving forward and try to get some good results before the championship is over,” Todd explains.

“Like most of the riders, I found the whoops tough and had a few crashes in them during the day but in the main event I tried to be a smooth and consistent through them as possible and that was the key to getting a better result.”

Last round winner, Jackson Richardson finished up in fifth place on the night after a fall early in the final had him outside the top 10 and struggling to move forward. Richardson fell but was quickly back on the bike and circulating but took a few laps to get back into his full race speed.

He worked his way inside the top 10 and then as the race went on and fitness became a factor, Richardson started to hit his straps and made several late race passes to get into fifth place and hold onto his second place in the championship, just one clear of team mate, Wade Hunter.

“The positive from the night was that fifth was a pretty good result and reasonable damage control in the points considering I crashed in the final. We worked hard all day trying to get the best set up for the whoops as they were the difference out there and I felt I could improve through them.

“I’m 11 points out of the championship lead so with three rounds to go, it’s time to go after some race wins and put some pressure on,” Richardson warns.

Serco Yamaha will now shift their focus to round four of the championship at Avalon Speedway this Saturday Night and it will prove to be a critical round before the final rounds of the series move indoor at Sydney.

To follow the Serco Yamaha team on social media: www.facebook.com/sercoyamaha or @sercoyamaha

Daniel Milner has finished the second day of the A4DE with a 27 second lead over second placed Matthew Phillips. […]

BLUE IS BACK! We spent two days on the 2016 WR450F and it’ll take the whole next week to wipe the smile of our face PHOTOS BY GREG SMITH/iKAPTURE We’ve been salivating at the prospect […]

Hunter Ruled out of Supercross Finale

Serco Yamaha’s Wade Hunter will miss the AUS-X Open with a broken foot. […]